“It is something that all our students look forward to, and we appreciate the many parents who come and share about their jobs,” said Principal Wayne Williams.

Counselor Renita Matthews coordinated an extensive list of the participants that ran the gamut of professionals. 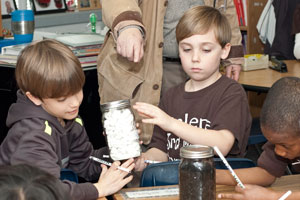 Brad Radice, now part-time sportscaster with CBS 42 and father to third-grader Kristin, took visiting classes through the process of putting together a sports newscast, asking the students to provide details for several sports stories of merit.

Not surprisingly, the immediate focus was football, football, football until Radice polled for Auburn vs. Alabama fans present, and the students were able to remember that variety — cross-country, basketball and gymnastics — might add viewer interest to their presentation.

Radice is a Florida native who graduated from Samford University and is also currently the school’s director of media relations. He chose to be a sportscaster, he said, because he and his father always had great conversations about the sports world.

He attended Loyola and LSU Medical School. His daughter, Chloe, is in Mrs. Swinsick’s fourth-grade grade class. Risch presented an interactive presentation about blood-typing and how forensic science is applied.

The questions and scenarios offered by some students might lead one to believe there are several budding crime writers in the making at HIS!

Mining engineer Joseph Ferrell from Carmeuse Lime and Stone at Saginaw challenged students to find one item in their classroom that does not come from a mine or from tools that are made from mine products.

“Man is the only one of God’s creatures that digs material from the earth and shapes it to suit his purpose,” Ferrell said. “Mining is very fundamental, and in many ways to be a human being is to be a miner. Early man extracted stone and metal from the earth to make tools.”

The students were amazed to learn that today’s limestone began as reef coral 600 million years ago. Samples of limestone and coal before and after kiln firing were passed around for the children to examine.

One on-the-ball student said he heard there used to be a mine where Old Cahaba subdivision is today.

Unfortunately, Ferrell said, as he is not a historian he could not confirm that.

It may be necessary to send him to remedial after-school study at the Helena History Museum.

There, boys and girls, you can see artifacts and old photos that tell the story of Helena’s mining history and get the answer to where which mine(s) were once located.

History on the move in Helena

City employees Chris Ramsey, who assisted in moving the two headstones from 1917 Eureka No. 4 mine, with Keith Sims,... read more