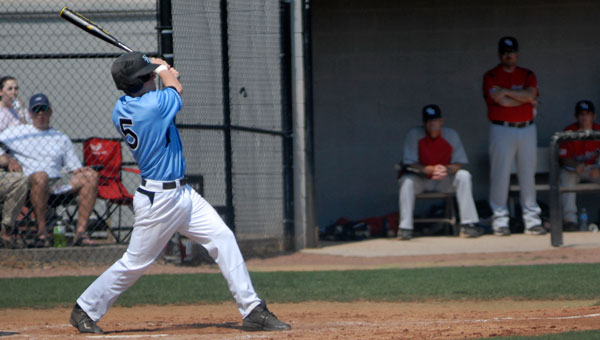 HOOVER — Spain Park High School senior Mikey White turned to one of his favorite films when he needed inspiration to break out of the worst slump of his baseball playing career.

White, who had a tough outing two weeks ago in a doubleheader against Hoover with several professional scouts in attendance, used scenes from Seabiscuit to correct his mindset. White made playing the game simple again in his head.

“Looking around and seeing all of the scouts,” White said, “I kind of let it get to me. I’m a baseball player. I’m not trying to do anything I can’t do or anything I haven’t already done.”

White jumped on the first pitch he saw and pounded it over the left-field fence March 20, which sparked the Jaguars to a 3-2 victory over rival Oak Mountain in the Baptist Health System Buccaneer Classic at Hoover High School.

The bomb was the short stop’s eighth homer of the season, including his seventh in the past nine games since the doubleheader against Hoover. White finished 1-for-3 at the plate in front of the largest contingent of professional scouts this season who showed up to see White face off against Oak Mountain senior center fielder David Dahl.

Hunter Hall led Spain Park (13-10) offensively as he went 2-for-2 at the plate. Hall also earned the win on the mound after giving up just two earned runs on seven hits with five strikeouts in a complete game.

Justin Hoyt took the loss after giving up three earned runs on six hits with seven strikeouts and six walks in a complete game.

Members of the University of Alabama Frozen Tide hockey team celebrate their victory in the ACHA South Regional Tournament while... read more