Fifth grade students and teachers at HIS declared National Pi Day on 3.14 a sweet success as they all participated in activities put together by the Math Team.

Math classes are 90 minutes now, as mandated by Shelby County School Board and the state and a new state math textbook is on schedule for fall of 2012.

“Each day begins with a little mini lesson. We don’t teach a concept and then leave it, every morning we review five or six problems — some examples may even touch on concepts we have yet to study,” said teacher Dawn Cobb. 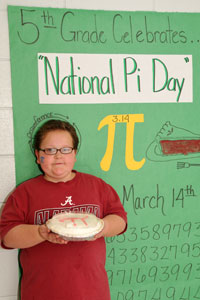 Trevor Willis and his mother made a peanut butter and jelly pie for Pi Day. (Contributed)

Even though the concept of Pi is used more in upper grades, it is being introduced now and each student wrote a paper on the history of Pi, learning it was first used in 1706, among other facts.

Students were busily measuring the diameter of circular objects brought from home, CD’s for example. And cookies. Lots of cookies. To prove the theory, students stretched a string measuring across the round object, then cut it off and saw for themselves that it would wrap around the cookie three times plus a little more.

They noted on their charts the measurements of three objects and indicated if the theory held true or not.

They also read a related book called Sir Cumference and the First Round Table.

“Teaching and learning math has morphed over the years, I think,” said Mrs. Cobb, who is now in her 18th year of teaching. “It has gone from just rote learning procedures to actually understanding the concept of numbers.”

Each student was challenged to memorize and recite as many of the digits after the decimal point in this infinite number as possible, after which they received a painted Pi symbol on their cheek.

Meredith Byrd in Mrs. Cobb’s class memorized all 100 digits. “My sister helped me learn. She told me to memorize them first in shorter clumps and then my brother helped me a little bit. I developed a rhythm to help me recall all 100.”

Sampling more than the dozen pies contributed by parents in each classroom was the highlight of this particular fifth grade day.

By LAURA BROOKHART / Community Columnist Make new friends, but keep the old. One is silver and the other gold.... read more