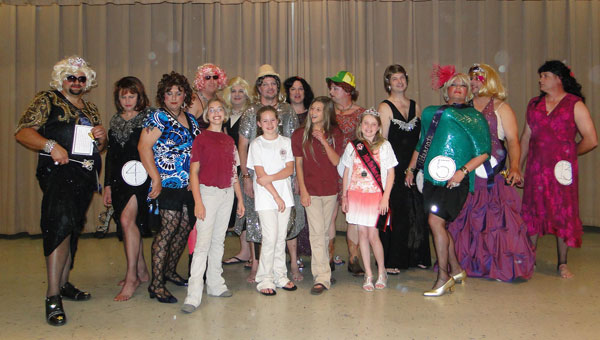 What happens when you mix a group of guys, evening gowns and make-up? Lots of fun, laughter and surprises. It was this and more as 13 male contestants vied for the crown of a womanless beauty pageant at Calera Middle School. Proceeds benefit students Shelby Middleton, Calista Holsomback and Madison Worden, who will travel abroad this summer as ambassadors for the People to People program.

Asked if ghosts can go through walls why don’t they fall through floors, Daisy Delight (Ryan McCormick) answered, “Well nobody said I had to say anything, I just had to come here and look purdy.”

Dounalicious’ (Sean Lemley) favorite thing about Calera is “it has the best police department in the world.” Roxannel (Brad Frasure) loves the sound of trains late at night. Lady Shablee (Blake Hays) enjoys crossing the U.S. 31 interstate bridge in the early morning and at five in the evening. Wayna Tressa (Wayne Etress) likes watching the maintenance man at Calera Middle School cut grass.

Third runner-up Joni (Jon Graham) was so stunning it nearly stopped traffic. “A man passed by us and almost wrecked because he was staring,” Shana Graham said.

Attendee Rebecca Krueger joked, “This is hilarious and disturbing at the same time.” I agreed.

Your home is more than a simple life investment