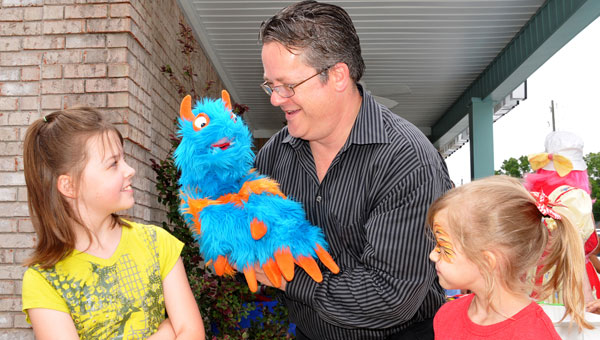 When I stopped by the one-year anniversary celebration of Helena Hometown Pharmacy recently, winging my way past kids with kitty cat- and doggie-painted faces and a jolly pink-haired clown, the amiable chatter of Mark the Magician with his friend (and hand-puppet) Scotty reeled me right in.

Mark Anderson told me, “I have been interested in magic since I was 5 and my uncle gave me a few magic tricks for beginners. Later, I saved all the money I earned cutting grass in our neighborhood to buy magic tricks and books.”

In the late ’60s and early ’70s, Birmingham had a magic shop called Tricks and Treats, a favorite stop for Anderson and his cousins and where he would later work from time to time.

“The owner told me that my best investment would be books, since one can learn many effects from a single volume.”

Anderson took his advice and, although $25 was a large amount of money to a young boy then, saved up and bought J. B. Bobo Coin Magic. This book contains hundreds of tricks as well as in-depth insight on sleight-of-hand and Anderson said he can still pick up the book today and learn something new.

“You can learn so much from others when you involve yourself in a club,” Mark said, “and soon I was performing at birthday parties and church functions.

“Learning magic has been a great experience and has also given me a great way to meet people and break the ice in any conversation,” he said.

On his day job, Mark works with his father’s company, Anderson Pest Control, and said he can also make all your fleas and home pests vanish, as well! For more information, call 837-1078.