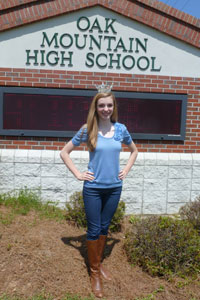 Tower will travel to Orlando in August to watch Callie perform in the Miss America Outstanding Teen Pageant, part of the Miss America Organization. He will travel with Callie’s huge family fan club: parents Angela and Mike Walker, sister Scarlett, twin brother Michael (North Shelby County); grandparents Bettye and Howard Plott (Remlap); Karen and CH Walker (Riverchase); and aunts, uncles, and cousins from as far away as Australia and Korea.

Callie is 14 years old and one of the youngest Miss Alabama Outstanding Teen winners who compete from age 13 to 17. She attended Inverness Elementary, Oak Mountain Middle and is a freshman at Oak Mountain High School. An A-B student, Callie is a member of the show choir with twin Michael and sister Scarlett.

The Miss Alabama Outstanding Teen contestants compete in four areas: Talent, fitness, interview and evening gown. With the title, Callie won $103,000 in scholarships, including a four-year renewable full-tuition scholarship to her choice of the University of Alabama, Auburn University and Troy University, as well as a one-year scholarship to Jacksonville State University. More than $300,000 was awarded in this year’s pageant. Grace Kurosaka of Columbiana was the overall academic winner and received $66,500 in scholarships.

Wreaths Across America needs sponsors to honor our veterans

A volunteering member of the Civil Air Patrol pays respect to a former flying friend who died in a helicopter... read more