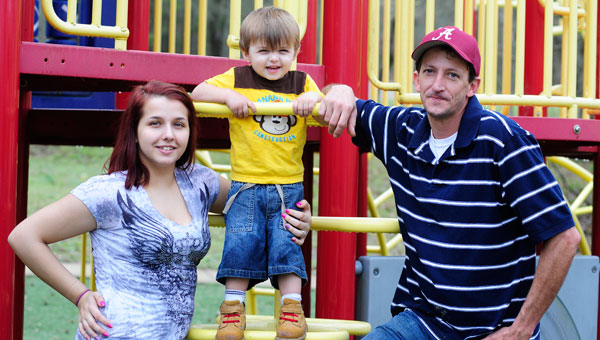 PELHAM – After Raven Allen’s father was killed in a Helena car accident April 18, friends and community members rallied around Allen and her two sisters for support.

Allen, 16, her two-year-old son, Carson, and her 11-year-old sister lived with their father, Glenn Allen, in Bessemer. Raven Allen also has a 24-year-old sister who works as a dental hygienist in Gardendale. Allen, her son and her younger sister have moved in with their older sister at present.

For more about Pelham High School junior Raven Allen’s story, click here for “Learning to parent at a young age,” a story written about coping as a teenage mom before her father passed away.

After Glenn Allen, 44, who had full custody of his daughters and Carson, passed away, his daughters began looking for a way to cover cremation costs.

Raven Allen said musician friend of hers would visit her father to discuss music and guitars. Christian, 16, the manager of True Blues, a new local blues band, decided to hold a benefit concert to support the Allen family.

A benefit concert at Shelby’s in Pelham will begin at 6:30 p.m. tonight, April 26. Shelby’s is located at 9340 Helena Road. Admission into the concert is $5.

“I’m going to publicly thank everyone because I haven’t gotten the chance to do that yet,” Allen said. “I am so thankful. My dad would be so flattered. It’ll be all good stuff, as it’s more or less a celebration. Let’s be thankful for what we had.