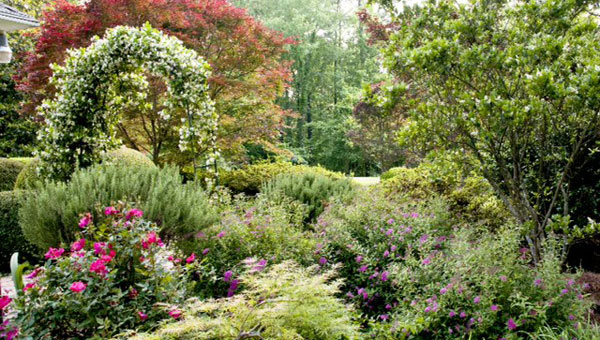 Roses are very personal to Chris Van Cleave. Not only is he the proclaimed “Redneck Rosarian” blogger and current president of the Birmingham Rose Society, but a visit to his garden convinced me that there is a suitable rose for anyone who cares to add one to their garden.

Prior to moving to Chadwick in 2005, Van Cleave was informed by his neighbor that he had been mowing over a rose that once flowered by his front door.

“When I learned that, I decided to try to cultivate it to grow again and within five months, it had climbed up and all over the trellis provided. I felt like I had resurrected it,” he said.

Social climber lives up to its name on the fence in Chris and Tina Van Cleave’s garden. (Contributed)

Roses, Van Cleave said, take him back to his mother and grandmother’s gardens growing up in Tennessee and the wonderful fragrances he remembers from boyhood.

“The older varieties tend to bloom first, then the hybrid tea roses and the floribundas. With judicious pruning, I encourage mine to peak in early May, so that I will have good blooms to enter in the rose show held at Birmingham Botanical Gardens on Mother’s Day weekend,” Van Cleave said.

The rose count in Van Cleave’s garden has just surpassed the 100 mark and looks as if it will continue to grow.

On the other side of Helena is a garden of a completely different sort, that belonging to Lou and Deborah Elliott. Their home is an older one that was remodeled by necessity after storms in 1990 felled some 75 giant oaks.

From this chaotic beginning, they have created a series of interlinked gardens all around their property. They have gradually planted 27 Japanese maples, including a butterfly Japanese maple and Acer palmatum ‘Orido Nishiki’, all of which bring various shades of red, orange, gold and even pink to the Lady Garden, the Woodland Garden and the Hydrangea Walk throughout the season.

The beauty of both of these gardens can be appreciated without an actual visit, as both Van Cleave and Elliott have blogs. See the blogs redneckrosrian.wordpress.com or Debsgarden.squarespace.com/