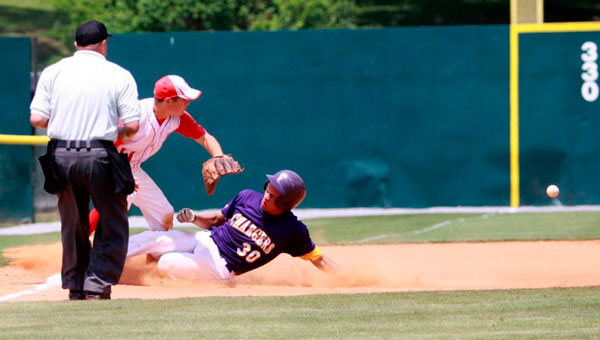 Cornerstone Christian School junior Adrian Young slides safely into third base in the Chargers' 6-1 win over Jackson Academy in the Alabama Independent Schools Association Class 1A championship series May 8 at Paterson Field in Montgomery. (Contributed/Cindy Wingard)

MONTGOMERY — Cornerstone Christian School junior Adrian Young didn’t let the thought of the Chargers’ season possibly being seven innings away from the history books cross his mind on the mound May 8 at Paterson Field.

Young, with the ball in his hands and the Chargers facing elimination in the Alabama Independent Schools Association Class 1A championship series against Jackson Academy after a 3-1 loss in the series opener, kept a positive outlook throughout a complete-game victory in the Chargers’ 6-1 win in the nightcap.

“I was thinking, ‘We can’t lose,'” Young said. “We’ve played well all season and I felt like we choked in the first game. We needed to come back and do our thing.”

Cornerstone Christian will face Jackson Academy in the deciding third game of the AISA Class 1A championship series May 9 at 5 p.m. at Paterson Field in search of its first baseball title in school history.

“We’ve got to hit the ball,” Smith said. “I think a little bit of nerves hurt us.”

Young allowed just one unearned run on six hits with four strikeouts and one walk in the complete-game effort in the nightcap.

Hagan Joiner led the Chargers offensively as he finished 2-for-4 at the plate and scored two runs in the victory.

Joiner, the first batter in the game, reached on a fielding error and scored on a RBI double by Payne to give the Chargers a 1-0 lead in the top of the first inning.

Cornerstone Christian pushed its lead to 2-0 in the top of the third inning when Joiner reached base on a single and later scored on an RBI single by Davis.

The Chargers took a 3-0 lead in the top of the sixth inning after Martin reached base on a walk and later scored on an RBI single by Reither.

Jackson Academy cut the deficit to 3-1 in the bottom of the sixth inning, but the Eagles left the bases loaded before plating the tying run. Meanwhile, the Chargers added three insurance runs in the top of the seventh inning to clinch the victory.