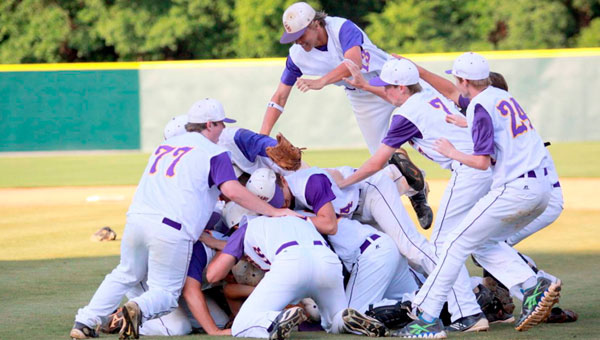 MONTGOMERY — Cornerstone Christian School sophomore Tim Warren had trouble keeping his feet on the ground following the Chargers’ 6-1 victory over Jackson Academy in the deciding third game of the Alabama Independent Schools Association Class 1A championship series, which clinched the school’s first state baseball title May 9 at Paterson Field.

It wasn’t due to unconfined exhilaration after leading the Chargers to a state championship. Warren literally couldn’t keep his feet on the ground thanks to his teammates and coaches, who took every opportunity to scoop up the 5-foot-6 pitcher affectionately known as “Dawg” and carry him around.

Senior Austin Davis charged the mound and lifted Warren off his feet immediately following the victory. Cornerstone Christian assistant coach Jeff Fortenberry then took a turn, carrying Warren around for a few yards in celebration of the title.

Senior Hagan Joiner finally got his arms around the diminutive pitcher and lifted him off the ground for a celebratory hug in the post-game huddle.

Cornerstone Christian coach Tim Smith said Warren, who capped the season a perfect 9-0 on the mound, provided a much bigger mound presence than his stature indicates in the championship game.

Warren gave up just one unearned run on four hits while recording three strikeouts without issuing a walk in the complete-game victory.

“It means a lot to me,” Warren said. “To be the first team in school history (to win a baseball championship) means a lot.”

Junior Adrian Young was named the AISA Class 1A championship series’ most valuable player after finishing 2-for-4 at the plate with a double. Young drove in one run and scored one run in the victory.

“I wasn’t expecting to be named the MVP,” said Young, who helped the Chargers force a third game in the series with a complete-game victory in the second game. “It feels great.”

Davis, Payne and Warren joined Young on the AISA Class 1A all-tournament team.

Young lined a double into the right-center field gap and later scored on an RBI groundout by Davis. Payne, who reached base on a passed ball after striking out, came around to score on an RBI double by Wingard.

Jackson Academy plated a run in the top of the second inning to cut the deficit to 2-1.

Cornerstone Christian responded with four runs in the bottom half of the inning.

Warren led off the inning on a walk before scoring on an RBI double by Young. Young and Joiner came around to score on a two-run single by Payne before Davis scored on a balk to cap the four-run inning for the Chargers.

Warren cruised down the stretch, facing just one batter over the minimum in the final five innings.

Smith said he’s proud of the Chargers’ six seniors who made history by leading the school to its first baseball title.

“They’ll remember this for a lifetime,” Smith said.