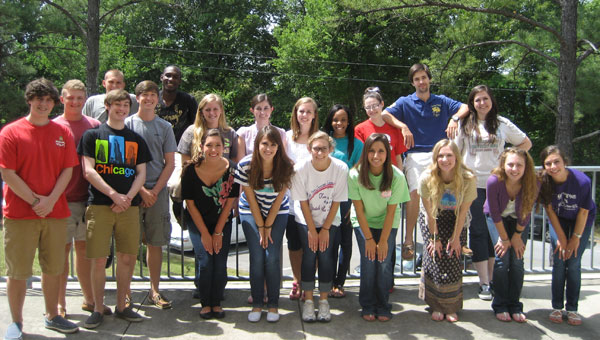 There are unique T-shirts also. Alexandria Robertson is headed east to Savannah College of Art and Design. Emily Rames plans to attend Purdue. J.T. Ross will attend Duke University. And Emily Sansom, who had never been on a plane before she traveled to Minnesota with the literary magazine staff, will journey to Cornish College of the Arts in Seattle.

Why is this class unique? They are the last graduating class who went through all of middle and high school together. They have endured the construction project that reminds us of the puppet Lambchop’s “The Song That Never Ends.” They are the first class not to have pep rallies in the gym their senior year. In spite of this, they complain little. In fact, they are intolerant of whining.

The class of 2012 believes in action. They go to each other’s competitions whenever they’re not competing themselves. They filled the stands for football games. Athletes came to theatrical productions. Every announcement of a PHS win elicited cheers — for the scholars’ bowl team, the battle of the books team, the volleyball team, the basketball teams, the baseball team, the softball team and for track, tennis and golf competitions.

Our seniors support each other. J.T. Ross asked judges at the judicial candidates’ forum, “With all due respect, what is your stand on Alabama’s new immigration laws?” His classmates were affected, and this young man was brave enough to question. PHS students walked with Carson Sumpter in his final year of life. They shared Carson’s journey until his death last summer.

Perhaps Sumpter’s impact helps these 2012 grads see so clearly. Students are invited to contribute to a book about Sumpter. When others read their stories, Carson’s impact will continue. Impact statements can be saved in Carson’s Impact folder at school or emailed to carsonsimpact@gmail.com.

As our seniors prepare for their final walk as classmates, they leave their stories of Carson’s impact with us. The class of 2012 readies themselves to author the next chapter — their own stories of amazing impact.