A Cahaba Lily by any other name 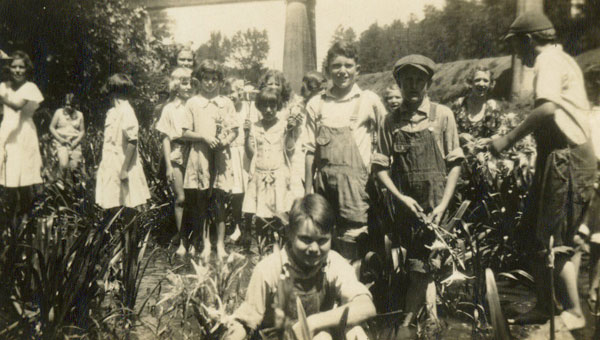 This photo showing children gathering in Buck Creek at Cahaba Lily bloom time is stamped Lollar’s, Birmingham on the back and dated June 14, 1934. (Contributed)

If I asked if you had heard about the odoriferous Pancratium fluitans, which has been spotted in Helena, I am sure that many would react with the same horror that you did upon hearing that some dead crawfish had been thrown into Buck Creek. Yes, that raised quite a stink.

I’ve managed to innocently raise some other stinks along the way while writing about the events in our little town, but take a breath, the aforementioned odoriferous species is also known as Hymenocallis coronaria or Shoals spider lily in South Carolina and Georgia, the only other places besides Alabama where our beloved Cahaba Lily grows. It requires a swift, shallow water current and direct sunlight to flourish.

The word was put out a couple of years ago by blogger Hewy that Helena has a stand of Cahaba Lilies right in our own Buck Creek, and there is a well-worn path, probably mostly used by bank fishermen, that leads from Old Town to their home just down from one of the train trestles.

“When we were kids playing in Buck Creek, we didn’t think anything was special about the lilies,” historian Ken Penhale said. “I do remember that on Memorial Day, folks would go down and pick them and put them on the graves.”

Last year was my first year to visit the lilies, and that was with the help of Hal Woodman and his trusty walking stick. This year, camera and trusty monopod in hand, a photographer friend and I made the hike on April 30, and were rewarded with beaucoup blossoms. We found the river too high and swift to risk walking out to the lily stand, though it would be an ideal year to visit by canoe.

I have also read that each bloom, in its beauty for only one day, may be as big as your hand, although I can’t say the Buck Creek stand held any so large.

In an online article by Frank Emory, he cites many facts including that Cahaba Lilies open late in the day in preparation for pollination by the Trumpet Vine Sphinx, a nocturnal hawk moth.

“Although the moth is able to see color even in faint starlight, the white flowers contrast sharply against dark surroundings making them appear as beacons of light in the dark.”

Since 1990 West Blocton has held an annual “Cahaba Lily Festival” in late May at which it crowns a “Cahaba Lily Queen” after which, crown on head, she wades into the shoals to be photographed with the lilies. Sounds like another Alabama road trip!