Passion for daylilies lead to business 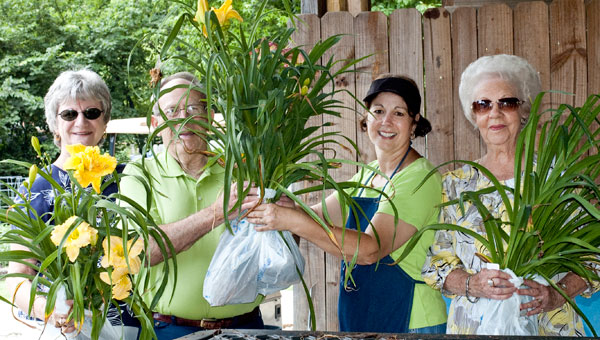 In the backyard of Morris and Becky Parr, Elvis lives alongside Johnny Cash and Sebastian the Crab and nearby is Barbie in Pink.

Only if you are a gardener passionate about daylilies, you will get this play on words first time around.

Everyone who visits Dancing Daylily Garden seems to appreciate the wit, wisdom and intention with which plant breeders choose names for their new hybrids.

“It’s amazing to think that all these originated from the orange or yellow ‘ditch’ lily over the last 75 years by hybridizers who have been crossing the different varieties back and forth,” said Becky Parr, sweeping her hand across her expansive collection of some 1,000 daylily varieties.

Early on, her aunts in Cordova got her started buying and collecting daylilies, but only after being laid off from her administrative assistant position in 2009, did the idea of making daylilies her business take root.

It was also fortuitous that by then she was newly married to Morris, who also liked daylilies and expertly wields shovel, spade and pitchfork.

Dancing Daylily Garden, now in its third year, holds open house two to three weekends in peak season and this year that time came in late May.

As the hottest months come on, the plants will suffer the heat as we humans do, appreciating water and fertilizer until cooler weather arrives in September when the daylilies come into bloom for a second time.

Folks are awed by the spread and variety of blooms — and they can get downright silly when they start reading the name tags that Becky meticulously provides for each.

Perhaps it is the seemingly happy-go-lucky attitude and appearance of the daylily that lends itself to amusing names such as Redneck Riviera, Yee Haw, and Nekkid Woman Driving a Tractor — a cultivar of Joe Goudeau, a member of the Baton Rouge Daylily Society.

For the first time this year, Dancing Daylily Garden is able to offer a BOGO Free deal on more than 100 varieties in stock and will be adding more along as quantities increase through June. They will also be at Helena Market Days with bare root freshly dug daylilies for $5 and $10.

Dancing Daylily Garden pictures its daylilies and prices and other helpful growing information at Dancingdaylily.com.

Heads up on goose etiquette

This is St. Francis, a gander who retains a slight limp from an encounter with fishing line. Helena residents Melissa... read more