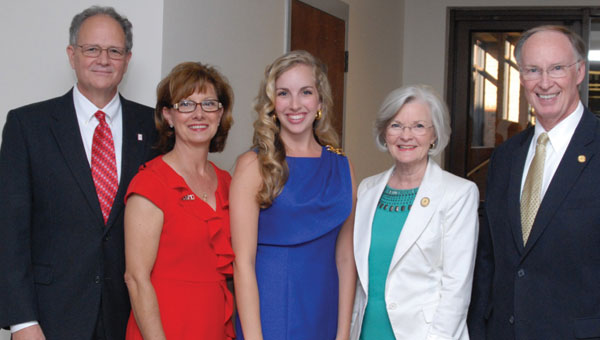 Dr. and Mrs. Thomas Rivers, Sr., Rachel Rivers and First Lady and Gov. Bentley share a moment together prior to the fundraising dinner May 23. (contributed)

With more than 400 people in attendance, the Support Our Soldiers first-ever fundraising event was a huge success producing about $14,000 for the cause.

Bentley, a veteran himself, thanked the soldiers, sailors, airmen, guardsmen and Marines for their hard work and dedication to our state and nation.

Bentley was a captain in the United States Air Force and later became a hospital commander.

Members of all branches of the military were in attendance in support of the new non-profit organization, started by Rachel Rivers and her parents, Dr. and Mrs. Thomas Rivers Sr. of Hoover.

The organization was founded in honor of Thomas Rivers Jr., a graduate of Briarwood Christian High School. He was a 22-year-old Marine Lance Corporal who was killed by an I.E.D. in Afghanistan on April 28, 2010.

The purpose of the organization is to support soldiers in the general sense of the word, encompassing all military branch members as they serve abroad.

The organization collects some of the “luxuries” of home that soldiers cannot access on the frontlines. Items such as Pop Tarts, shoestrings, candy, gum, books, peanut butter crackers, protein bars and small sports items are placed in care packages and sent to them by Support Our Soldiers.

The organization also acknowledges veterans and thanks them in various ways for their service to our great nation.

Marine Lance Cpl. Matthew Proctor also spoke at the dinner sharing with those in attendance some of the living conditions he and Rivers experienced in Afghanistan.

“It would get up to 145 degrees outside. We would put our Ramen Noodles in bottles of water and sit them outside to cook in the sun. In a few minutes we could eat them,” Proctor said. He also spoke of lying in silence only to be awakened by mortars being dropped all around them.

Rachel Rivers represented her family and told how the organization originated as her platform for various pageants she was in.  “It has grown more than we ever thought it could,” she said. “Our dream is now a reality.”

For more information on Support Our Soldiers or how you can donate to the cause, please visit Supportoursoldiersalabama.org.