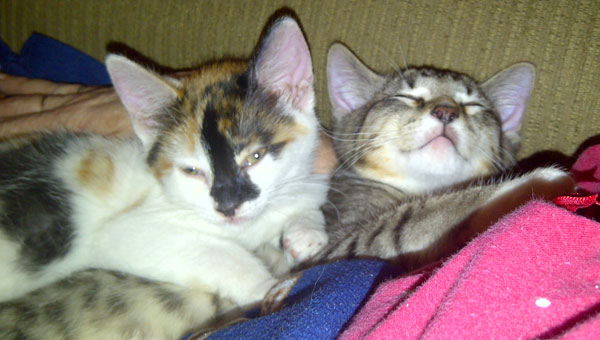 Callie and Dinky are two of the kittens recently adopted from Momakat Rescue. (contributed)

Seven years ago when Tina and Sean Fitzpatrick moved to Shelby County, they noticed an abundance of stray cats in a parking lot in Inverness and started feeding them.

They soon began trapping the cats, getting them spayed or neutered and then returning them to their rightful owners or finding them a new home.

They found that most people did not mind feeding stray cats, but they did not want to go to the expense of having them spayed or neutered.

That was three years ago, when Momakat Rescue was officially established to actively reduce feline overpopulation. The first month of business, she had an influx of phone calls. Her cell phone bill was more than $400, and she was receiving up to 30 calls a day. Her husband quickly suggested she get unlimited calling, and she did. The calls however, have not lessened much.

“We want to help cats as much as we can, but we have to turn down more than we can help,” Fitzpatrick said. They presently feed 100 feral cats in a half dozen colonies a day.

They have 34 kittens up for adoption, and they are housed in style and comfort. There is a room designated only for kittens so they can be socialized with other same-age kittens. Then there is a room for the older cats, too.

The rescue is an adoption partner with Petco on U.S. 280, where they offer adoptions every Sunday. They also partner with Riverview Animal Clinic, which offers an entire room dedicated to the adoption of the rescue’s kittens. Inverness Animal Clinic has a two-tier cage to showcase kittens and cats together but separately.

Momakat needs more volunteers to provide foster homes for their cats. They will already have their shots and come with a spay/neuter certificate for the appropriate time.

As with any non-profit organization, Momakat is in need of donations. To learn more or to make a donation via PayPal, visit Momakat.org.