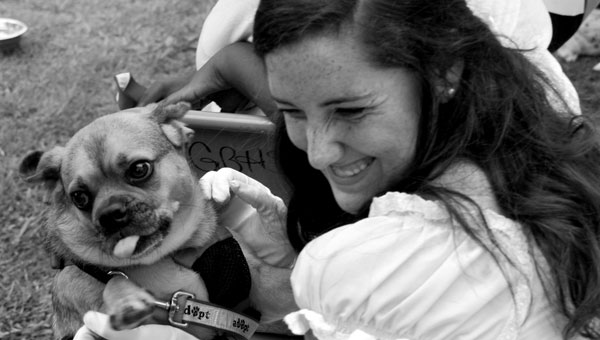 A jolly good time was had by all in attendance on June 9 at Helena Market Days with one highlight of the day being the successful adoption of three Greater Birmingham Humane Society dogs into permanent homes.

From the perspective of GBHS Outreach Coordinator Christy Little, it was an exceptionally satisfying morning and all who realized what was taking place found it a gratifying reflection of big hearts in a small town.

A puggle, now named Maximus, met the love of his life when he licked the nose of Barkley Bullard. Barkley was wearing her Helena Belle gown, representing the Belles along with Kylie Woodman and McKenna Downs.

Since Maximus literally received the white-gloved treatment from the start from Barkley, he likely thought he was headed home to Tara!

“Barkley has been wanting a dog for some time,” her mother Tiffany Bullard commented. “And I have been putting her off. She even did her dog research and concluded a puggle would be the best match for her.”

“She called me from the market saying, ‘Please, mom, hurry up and get here’ and I had messages from Amy Bolt, also, making me think this was some kind of emergency.”

“When I arrived, there was a crowd waiting for me like some celebrity.”

Tiffany, too, fell for Maximus (formerly Patches) who was given up for adoption because his owners had to move to an apartment.

“He is the sweetest dog ever; he hasn’t had any accidents and he waits outside the bathroom door for us. He does this kind of snorting thing — we play a game snorting back and forth. Maximus has brought us joy every day!”

Maximus has mild asthma, and occasionally requires a little puff from his nebulizer. He is spending his days with Barkley, who told her mother that she would rather have this dog than a car for her upcoming 16th birthday.

“Maximus has been such a blessing for us already,” mother and daughter agree.

A Chihuahua and a friendly Terrier mix also found new homes that day.

Redneck Partyware designs are a hit