‘All you want to do is ride around, Sally’ 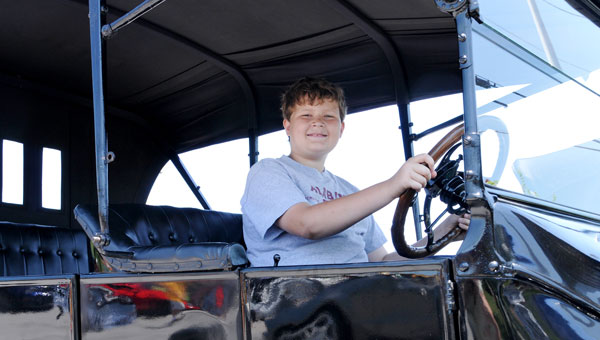 Chance Phillips, 13, plans to learn to drive the 1919 Model T he and his father restored. Though it is not a particularly easy car to drive, Butch Phillips takes the wheel for local parades and weddings. (contributed)

This catchy tune from 1965 was stuck in my head after dropping in at a cruise-in held at Ernest McCarty Ford.

Jason Britnell of Helena told me his dad drove a ’67 Mustang when he was 16 and that sparked his interest. Britnell purchased his ’65 Mustang in 2004 and decided to replace the stock engine with a 2001 carbon motor.

“It just grew from there,” he said.

This spring, eight years later, he finished the wiring and drove to his first cruise-in.

Show winner (and not for the first time) was Vince Tropeano with his wife’s 1965 1/2 Mustang. He found it — like most great restorations — rusted and in pieces. This car, with its hand-tooled leather seating and mirror-perfect paint, only comes out when the sun shines.

“It’s a 5-speed V-8 that does just what it was designed to do. Go from point A to point B really fast,” said friend Jim Wathen, who said he was allowed to drive it — once and only once.

At this show a classic 1919 Model T Touring Ford owned by Butch and Chance Phillips caught my eye with its traveling oilcan handily clamped beneath the hood.

“On this model the valves had no covers, making it necessary to squirt oil on them frequently,” Phillips said. “This model has wooden spokes in the tires and when your spokes began rattling, the car had to be parked in the creek for a period of time to moisten the wood again.”

Butch Phillips rebuilt this car, including the red wooden spokes for one wheel, which he soaked in linseed oil and kerosene, then sealed with paint.

This Model T originally belonged to a man known as Papa Garrett, in Mississippi. Garrett had only one leg. He could drive this vehicle as it had no clutch, so he kept it long after the A-models came out.

Phillips is only the second owner of this car, which was kept on a porch in Southside for 50 years. The removable parts had been housed elsewhere and Phillips was able to drive the car out of his shop 14 months after purchasing it for $500.