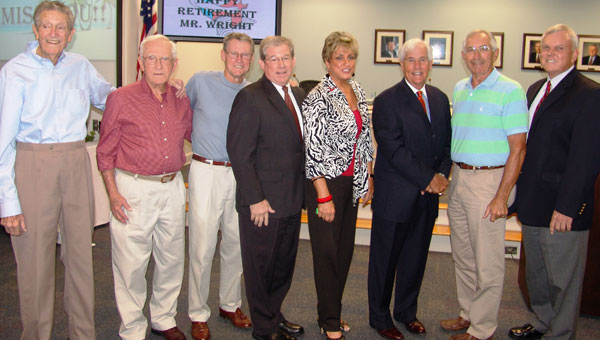 After serving 37 years in public education, John Wright has retired.

Beginning his career as a teacher at Brighton Elementary School in Jefferson County, he was later a guidance counselor at Pizitz Middle School then became the principal of Gwin Elementary in Hoover.

For the past two and a half decades, he has served in multiple administrative roles in the Shelby County School System. The past 12 years he has been the deputy superintendent.

A retirement reception was held for Wright on May 21. It was a rare occasion when all seven former Shelby County superintendents of education attended the event.

Fuller pointed out that history was in the making when he shared the fact that he was only in the first grade when Elvin Hill first became superintendent.

Regardless of anyone’s age, or years of service, 26 years is a long time to serve in any capacity, and there is no capacity more important than education. Wright has obviously done an outstanding job as is evidenced not only by his longevity, but by the support and presence at his retirement reception of the seven superintendents under which he has served.

His legacy is one of commitment and dedication to what has been and continues to be one of the finest education systems in Alabama. We owe a great deal of gratitude to him and the seven leaders under which he has served.