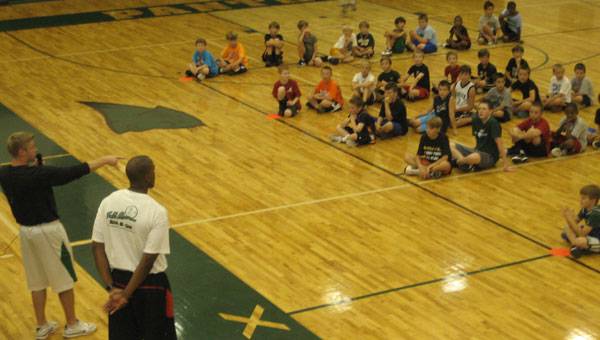 PHS Head Basketball Coach Joel Floyd blew the whistle. Campers, ranging from second to sixth graders, who had been shooting and running around excitedly, suddenly froze. No balls bounced, no boys moved.

“When the whistle blows long and loud, freeze where you are,” Floyd said. “You learned that lesson well yesterday. Let’s get ready.”

“Good. That’s what we talked about,” Floyd said. “Your parents are paying for you to have fun at camp. You need to do something nice for them. Let’s play basketball!”

Having a teenage daughter and a 9-year-old son helps Floyd relate to these campers-and their parents. He knows that kids have lots of summer energy, and basketball camp is a perfect release. In addition to building relationships within the community, basketball camp is a fundraiser.

“We do a two-day camp after Christmas and this four-day camp in the summer,” Floyd said. “This year, we’ll use the money to replace uniforms. All money goes back into supplies for the players.”

Five long basketball seasons add up to lots of wear and tear on uniforms. Because these PHS players work their camp, they’re earning their new uniforms. What about 2012 grads? Why are Floyd’s graduated players returning to help?

Coming into Xavier Lacey’s signing party on Monday night, I could see why. According to Floyd, “Lacey was signing his national letter of intent to John Wood Community College in Quincy, Illinois, where he will continue his basketball career and education.” I saw Lacey and his family celebrating with his teammates, their families and their coach.

These grads are connected to coach Floyd. Together, PHS players and coaches have worked to bring victories and fun back to Pelham High School basketball. Watching their success has been delightful. Watching them reach out to the next generation of PHS basketball is inspiring.