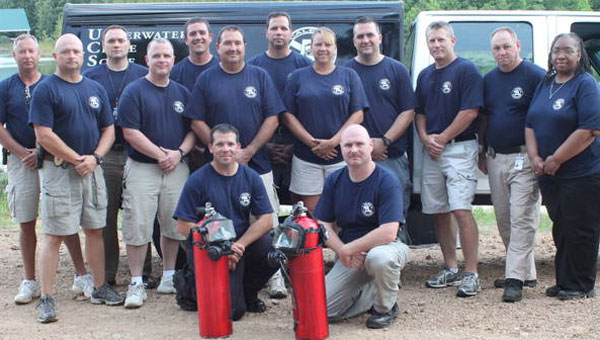 The dive team is under the command of Calera Deputy Chief Clint Barnett. Barnett was diving recreationally before the team formed.

“I was called out to an accident at Vulcan Materials when I was a patrol officer in 1999. Though none of us were trained for that type diving and recovery, we managed to get through it.

This prompted departments in the county to consider special rescue teams. Calera Police Department looked at just the diving portion. Through donations and grants, the city acquired equipment and began offering statewide mutual aid assistance in 2003.

The team is currently comprised of 14 police and fire workers. Barnett said not all team members are divers.

“Actually, more work is done on land than in the water,” Barnett said. “There are support boat operators, sonar operators and line tenders. And it’s not always a body we’re looking for, most of the time we’re called out to recover items of evidence.”

Divers are certified to approximately 130 feet underwater, but most call-outs are fewer than 60 feet deep. The team works primarily within the state, though they traveled out-of-state to help with the Hurricane Katrina recovery.

Since April the team has responded to seven operations. Within the same day April 1, they assisted the Shelby County Sheriff’s Office at an area lake and assisted in a drowning at Oak Mountain State Park. The team was instrumental in locating the vehicle belonging to Carrie Elaine Gentry in Leeds quarry on April 10. A couple of weeks later they assisted in the recovery of a fisherman in Dallas County, then recovered the body of Thad Evans of Montevallo on May 29. They responded to two call-outs to clear areas for items of evidence.

The team has helped solve capital murder cases, proving the necessity of a dive team. “In the beginning no one really saw the need for a dive team,” Barnett said. “You may not ever need us, but if you do, it’s a great tool to have.”