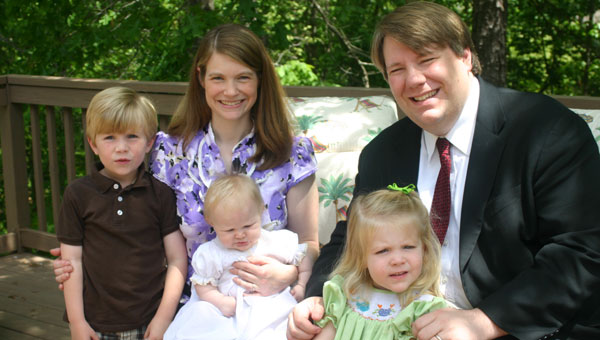 Kimberly and Matt Fridy with their “Young Republicans,” from left, Jack, Cate and Beth. (contributed)

Former chairman of the Shelby County Republican Party, Matt Fridy, has been named to the Top Twenty list of up—and—coming local leaders from across the state.

The list was created by Yellowhammer, a popular political blog. The list is a “Who’s Who” in cities and counties across Alabama.

Fridy is also a member of the state Republican Party, chairman of the Sixth District and was a presidential elector in 2008.

Fridy’s first memory of politics extends back to his elementary school years when his parents became active in the pro-life movement.

It was then that he developed an interest in politics in general. By high school, he was a volunteer in various political campaigns.

Fridy was surprised with the news of his making the list. As for now, he said his goal is “to serve people in whatever way God would have me do. Right now I am enjoying serving my clients at my law firm,” Fridy said.

While his making the list might have surprised him, it didn’t those of us who know him and have worked closely with him throughout the years.

He is an obvious choice for this kind of recognition and has worked hard to earn his place on the list. He has a future in local and state politics if he wants it.

Fridy is an attorney with Jordan, Ratliff and Brandt.

He is also an adjunct professor of business Law at the University of Montevallo, where he graduated from undergraduate school and was awarded the Young Alumni of the Year in 2010.

Fridy is an elder at Spring Creek Cumberland Presbyterian Church in and is a graduate of Leadership Shelby County.

He received his juris doctorate degree from the Cumberland School of Law. He served as staff attorney on the Court of Civil Appeals and the Alabama Supreme Court.

Fridy and his wife, Kimberly, have three children, Jack, Beth and Cate. They reside in Montevallo.