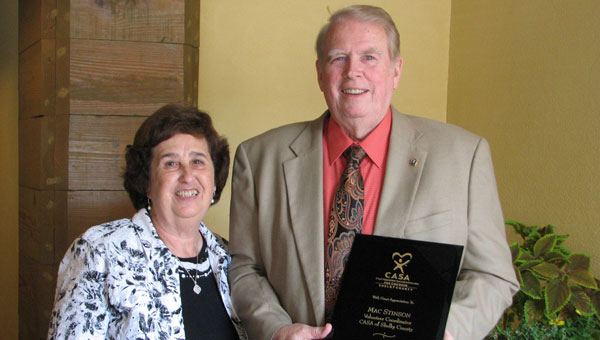 Mac and Glenda Stinson have been involved with CASA for 13 years. (contributed)

After 13 years, Mac Stinson has retired as the volunteer coordinator of the Shelby County Court Appointed Special Advocates (CASA).

Stinson, a retired Methodist minister and native of Columbiana, has trained volunteer advocates to go through the court process with abused and neglected children.

He has assisted them in their court cases and worked closely with Judges Patti Smith and Jim Kramer in Shelby County’s Juvenile Court.

As our county has grown, so has the number of abused and neglected children. Stinson and his wife, Glenda, a retired school counselor who has assisted him with CASA training throughout the years, have seen major changes in the past 13 years.

Regardless of the changes in numbers of court cases and the transition from Judge Patti Smith, after 26 years on the bench to now Judge Jim Kramer, who has served for the past 7 years, CASA has been the one consistent factor in our county’s District Court equation.

The Stinsons were CASA volunteers before Mac became the volunteer coordinator so they had plenty of experience in what being a CASA entailed.

They were able to share that experience with others.

Stinson is also the chairman of the Shelby County Sheriff’s Office Chaplain Program and has served under past Sheriff James Jones and present Sheriff Chris Curry.

Between his 13 years with CASA and his 16 years with the chaplains program, Stinson has done a great deal to benefit the people of Shelby County – individuals, children and families.

“Mac has given an equivalent of 29 years of his life to two separate non-profit organizations.

That is a great deal of time, energy and effort,” said CASA Board President Kathy Robinson. “We are grateful for his dedication to the organization we all know and love.”

CASA is funded through private funds, a grant from Shelby County and the Children’s Trust Fund of Alabama.

For more information on the Court Appointed Special Advocates and how you can become involved, please visit Casaofshelbycounty.org.