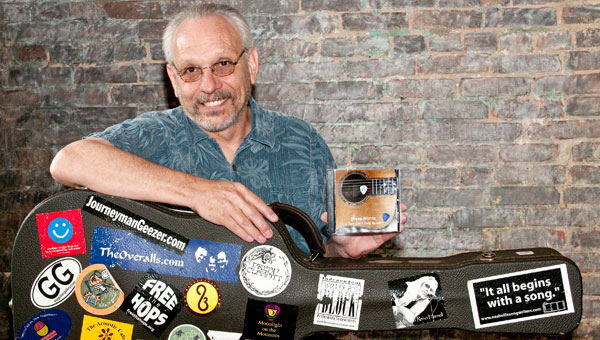 Every song has a story and if you are Journeyman Geezer Steve Norris, it is not unusual for moments from your life stories to become songs.

On his new CD entitled, “I Just Can’t Help Myself,” Norris says, “I wrote five of the songs and I stole the other five from my friends.”

Dan Farmer, mandolin player with Crooked Road and member of The Overalls trio, wrote “Room For You” and plays on several cuts. Janet Hall O’Neil, also part of The Overalls, provides backup vocals.

“I Just Can’t Help Myself” is dedicated to Gary Greene, who penned the title song and died in 2010.

“Sometimes a tune come first, sometimes the lyrics. Sometimes you get an idea and it just flows out, but more often it’s not that easy or simple,” Norris said.

In his song, “Friends Back Home,” the events in all three verses really did happen.

“Driving back from Arkansas, I stopped outside of Memphis. I was dining on chicken and biscuits when a John Ford Coley song started playing. I wrote all this down on my napkin.

“On down the road, I drove past the sign touting Elvis’s birthplace in Tupelo.

“And just as I hit the Alabama state line — and some people think I made this up — right then Sweet Home Alabama came on the radio.”

The song “All Those Years Ago” was written for Norris’ 40th Tuscaloosa County High School reunion (class of 1970), when classmate Brenda McAteer encouraged or perhaps nagged him into writing a song for the reunion.

The idea for “You Make Me Smile” came from long-time girlfriend Judy Daussman’s dream.

“I wrote it down that day, but the song came a year later when I found that piece of paper.”

“The Important of Part of Fishin’ ” contains a whistled refrain that feels very Mayberry-esque, and the lyrics segue in a Zen sort of way to the wisdom that “the important part of doing anything you do is doing it with all of your heart.”

Sage advice whether or not you are approaching geezer-hood!