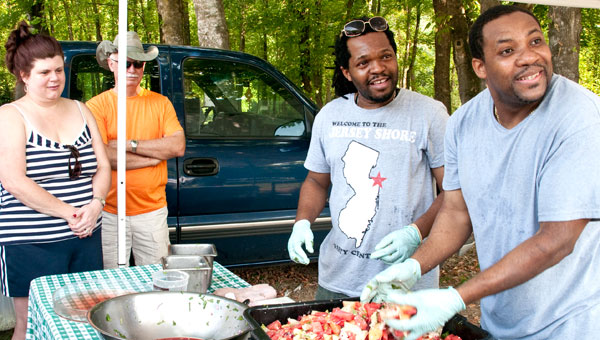 The energy at Helena Market Days has been growing steadily this summer no matter the heat. Many regulars come early, make their favorite selections and are headed home when the next wave shows up to check out the chef demo at 9 a.m. and musical performers that follow.

Welcomed for the first time were Chef Estinfort and Chef Pambo from Cafe De Paris, who prepared a French Summer Salad and Chef Chris Vizzina from Samford, who brought a taste of Sicily with his Summer Caponata.

Returning favorites drawing a crowd were Chef Sue Lemieux of Fox Valley and Chef Gray Byrum from Echelon Catering. Our guest chefs have been graciously sharing their recipes and these can be found online at Helenamarketdays.com.

Market regulars have enjoyed a variety of musical performances — from students of Heather Batey Voice & Piano Studio to the duo of Miles Apart, Thomas Trussell and Ashley Partridge.

Tents, tables and chairs have been added so that everyone will have cooler spots from which to view the chef and the musicians.

Coming up through August:

In a recent column, we incorrectly listed a website. The correct information for Southern Balloon Journeys is phone: 213-1054 and email: info@flysbj.com.

Southern Balloon Journeys offer the trip of a lifetime

William Davis, Barbara Hyche and Gary Hyche take to the air in the ‘Ado’ with Southern Balloon Journeys. (contributed) By... read more