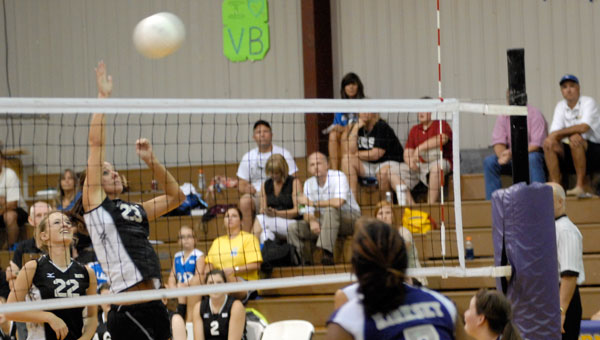 COLUMBIANA — Kingwood Christian School volleyball coach John Jones has seen enough matches through the first week of the season to call his squad a contender for the Alabama Independent Schools Association Class 2A championship.

Consistency is most important, Jones said.

“We’ve got a good chance, Jones said. “The girls have worked hard. If we can be consistent, we’ll be ok.”

Kingwood Christian’s imposing front line dominated against the Chargers in the sweep. Katie Allen Etheridge and Madelyn Pearce led the Lions (5-3) with four kills each in the victory, while fellow front-line standout Casey Whitmer chipped in two kills.

Etheridge helped the Lions take control midway through the second game in the match against Cornerstone Christian after registering one kill and three service aces during a 7-0 scoring run by Kingwood Christian, which broke a 9-9 tie and lifted her team to a 25-16 win in the set.

Etheridge posted three kills in the final game, a 25-12 victory, to help the Lions clinch the match.

While the front-line standouts have been impressive this season, Jones said a lot of the credit goes to Blair Holsombeck, who is playing the setter position for the first time. Holsombeck served up four assists in the victory over the Chargers.

Tamera Kirksey and Lindsey Sims led the Chargers (0-1) with four kills each.

Cornerstone Christian coach Cyndi Sims was pleased with her team’s effort in its season opener. Sims said the program added eight players during the offseason, which will help the Chargers take a step forward this season.

“We have a stronger team this year,” Sims said.

FROM STAFF REPORTS The Evangel Christian School volleyball team swept a pair of matches against Tuscaloosa Christian in the Cotton... read more