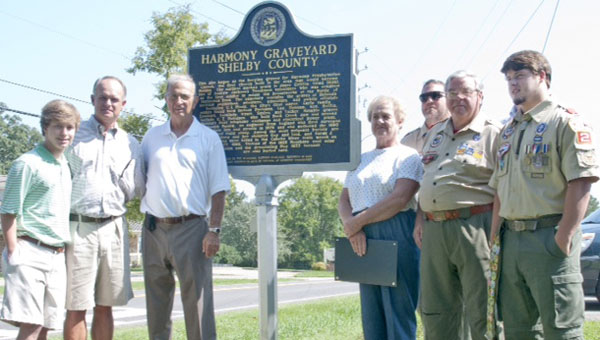 Helena residents recently gathered in the shade beneath a vine-covered oak tree to witness the unveiling of a new historical marker for The Harmony Graveyard.

Inside the graveyard facing south was the original Old Harmony Church built around 1850. Standing nearby was the first community schoolhouse. Between 1866 and 1893, the church was physically moved to its present site along Highway 261. That building, along with the Methodist and Baptist church buildings were destroyed by the 1933 tornado.

In 1978, Harmony Church became known as Helena Cumberland Presbyterian Church and the bell from the original Harmony Church is now mounted on the north side of the grounds.

The oldest grave in Harmony Graveyard is that of Col. Jones Griffin. Griffin, (d. 1836) a former soldier and early white settler, lived in the Coalmont Road area after chasing the Creek Indians with Andrew Jackson. He married Mary “Polly” Lee, sister of Needham Lee Sr.

Joseph Squire and his wife Jemima and infant daughter who died at birth are buried in the largest stone coffins atop the graveyard.

Squire, a mining engineer, mapped the early mining sites around the area before his death in 1911. Other names from Helena’s history—Dunnam, Roy, Davidson, Hinds and Ruffin—can be seen throughout the grounds.

The City of Helena Museum will be unveiling the restoration of the main floor that previously housed the boy scouts and celebrate its first anniversary on Sept. 8 and 9 with a special display of artifacts from private collections.