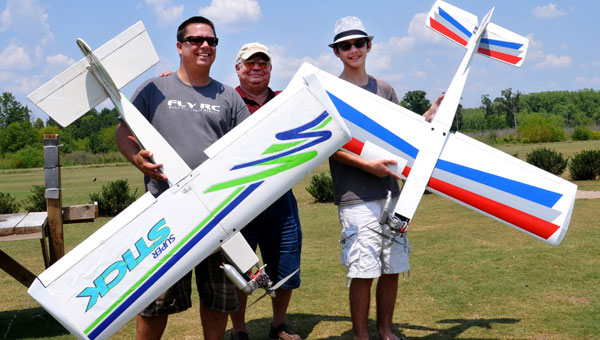 Mike, Bob and Alec Wieczorek with their RC planes. Spectators may see them and other members in action most weekends at the flying field at Alabaster Limestone Park. (contributed)

Call it creative play. For three generations of the Wieczorek family, flying RC planes is a family outing.

Pattern planes are RC airplanes specifically designed to execute aerobatic maneuvers. The contests involve flights with preset maneuvers. This year, they placed first and third in events in Prattville and third in Cullman, Knoxville, Chattanooga and Asheville.

Matthew Kendell, 17, has a year of experience with RC planes, but his father, Jeff, has brought him to club meets for years. Matthew also builds models and, via his YouTube posts, recently built a model plane for a collector in Denmark.

At meets, Matthew sets up his latest project for club members to view — an A6M2b Zero Mitsubishi channel controlled plane with 55-inch wingspan, retractable gears and a Kamikaze pilot at the controls.

“When you fly you fly; when you crash you crash. It’s all part of the sport,” he said.

Models with clear canopies usually have pilot figures — Snoopy is popular as are WWI and II pilots with authentic gear.

Member Leslie Harrison coordinates programs with local schools. Harrison personally works with the special needs class at Thompson Intermediate School teaching them about aeronautics and they assemble an RC plane. A field day is held where they can experience, via the help of a buddy box control, flying the plane.

ARCA invites those interested to visit a meeting held first Thursdays at 7 p.m. in the library at Thompson Intermediate.

Membership requirements and upcoming events may be found at Alabasterrc.org.