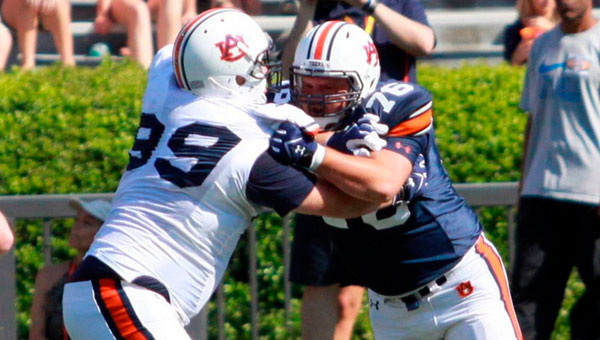 AUBURN– Colton Wingard has taken a long journey from playing football for small high schools in Shelby County to lining up against Southeastern Conference defensive lineman, every day at practice for Auburn University.

Wingard grew up an Auburn fan and dreamed of running out of the tunnel for the Tigers.

This dream became a reality when Wingard was able to dress only weeks after making the team as a walk on at the beginning of the 2011 season.

“They give a player of the week award and I got that so I was able to dress for the Mississippi State game,” Wingard said.

Wingard journey to becoming an Auburn football player had him attending five schools in six years.

He started at Shelby Academy where he was a four-sport star in high school playing football, basketball, baseball and throwing discus and shot for the track team.  When Shelby closed he transferred to Cornerstone Christian.

He missed football so he decided to try to walk on to the team. He was one of about 35 people who tried out.

The walk-on tryouts were much shorter than people think, Wingard said.

“Walk-on tryouts were just one morning and they told us they will call us if they want us to join,” Wingard said. “And I got a phone call.”

He was one of only seven of the 35 players who received a phone call that day.

Wingard remembers he was a little wide eyed at his first practice as an Auburn football player.

Wingard has been practicing at a variety of positions along the offensive line. He has adapted to the speed and strength of the college game and tried to minimize the mistakes.

“It is still intimidating,” he said. “Everybody is going to get beat, here and there. You just got to go out there and do your best every day because if you don’t you will be embarrassed.”

The attention to detail is the biggest adjustment for Wingard.

“During high school your offenses weren’t near as advanced,” Wingard said. “They weren’t as critical on the small stuff. In college, it is all about your footwork and other small stuff.”

Wingard hopes to make travel squad to the road and neutral-site games. He said if he makes travel squad he can push for playing time.

Wingard is one of two people left from the seven people who were walk-on players.

Being a walk-on player for a team that won a national title two years ago, is not the first time Wingard has been in the underdog role.

“My freshman year of high school, we won a state championship,” Wingard said. “We lost a lot of kids and going into my sophomore year we weren’t expected to win a lot, plus my coach had left and we had gotten a new coach.  We ended up making it back to the semifinal of the state playoffs.”

He was able to watch his brother, Auston, play football at Cornerstone some last season. He hopes his brother is able to return the favor this year.

In his spare time, Wingard said he likes to hang out with his roommates, friends and girlfriend. He admits there is not much spare time as a mechanical engineering major and football.

“Playing football and going to school is like having a full-time job,” he said.