Caitlin Connors was born a Republican 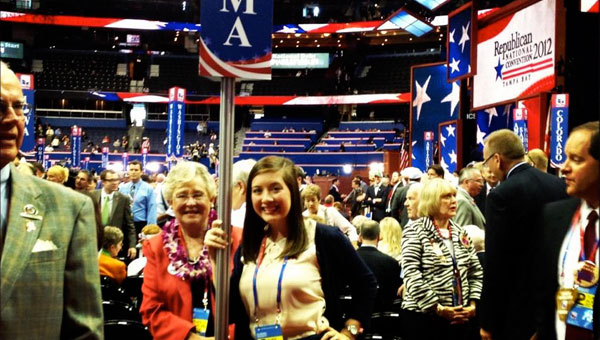 Caitlin Connors was born a Republican and she is attending her third Republican National Convention as a delegate.

Tampa, Fla., is full of Republicans from all over the country and Connors is among the youngest of them. Caitlin is the daughter of Elaine and Marty Connors of Alabaster. They have both been delegates to past conventions. Marty, her father, was at one time chairman of the Alabama Republican Party. He took her to hundreds of events and she says with great affinity, “I’ve been to a million rubber chicken dinners.” She also says she has met many inspiring political figures. Connors is a junior at the University of Alabama, where she is majoring in International Business and minoring in Spanish. She is a member of Kappa Alpha Theta sorority, Delta Sigma Pi business fraternity and, of course, an officer in the Young Republicans.

Many people question the purpose of today’s political conventions, but Connors said, “I believe having a convention is vital to the presidential process for multiple reasons.” She named issues that need to be addressed, nominating the GOP candidate and energizing the base among her reasons. “It strengthens the party as a whole,” she said.

As for making a career of politics, Connors said she thinks about it. While she didn’t commit to wanting a future in it, she didn’t deny it either. “Anything is possible and it is certainly in my genes.” After all, she was born a Republican.