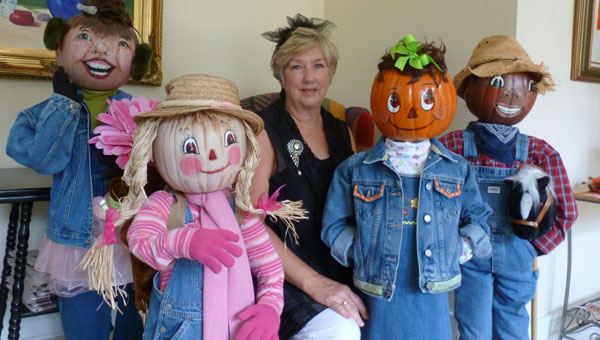 Columbiana’s Main Street is bursting with festive fall decorations. The city is adorable, a visual delight of scarecrows, hay stacks, corn stalks and pumpkins, a project of the Columbiana Merchants and Professional Association decorated by Susan Conn of Main Street Florist.

Among the fall decorations are many new faces in town, the Pumpkin Patch Kids created by Columbiana native Leigh Ann Langley. The faces, clothing, posture and personalities are simply something worth the drive to Columbiana to see our precious town decorated for the Halloween season.

Langley grew up in Columbiana, attended Columbiana schools and graduated from Shelby County High School in 1974. The daughter of AJ and Imogene Austin, Langley never considered herself very creative growing up. As a child, her beloved Aunt Glenda, sister of her father AJ and wife to Uncle Jimmie Kilgore of Kingdom, gifted Langley every holiday with a special treat. These gifts are treasured memories of Langley. The Christmas and Easter gifts usually were sweets and eaten, but the Halloween gifts were collectibles.

To say that Langley loves Halloween is an understatement. At the end of August, she starts a six-week process to transform her home with husband Maurice into a Halloween house, inside and out.

Last year, Langley wanted something new to put in front of her shop, the Columbiana Barber Shop across from the Shelby County Courthouse where she has cut men and women’s hair for 26 years.

She created Abigail, her first Pumpkin Patch Kid, who just happened to be the same size as her granddaughter. She decided that Abigail needed some friends and by Halloween Abigail had 21 pumpkin friends up and down Main Street and were all on the steps of the Shelby County Museum one day.

Langley has created many more of her Pumpkin Patch Kids this year to go with her original 22.

They will be on display in Columbiana till the Friday before Halloween. For more info, call Langley at 669-5333.