Lit Mag is raising the bar 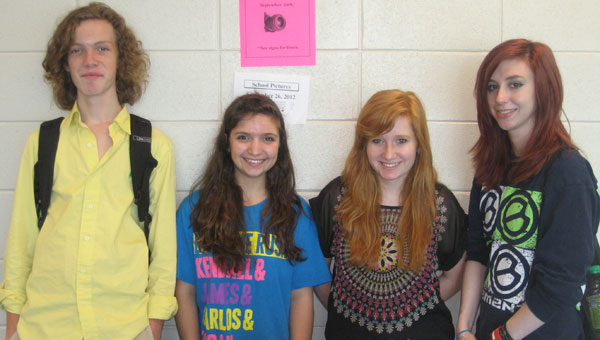 Dale Duke, Sarah Sansom, Maggie Smith and Michael Owens are ready to sell the 2012 "Catalyst" edition of the literary magazine after school. (Contributed)

“I have good news and bad news,” I told my first literary magazine staff in 2004. “The good news is-we have magazine money. The bad news is-it’s $11.”

Pelham High School’s previous literary magazine sponsor was also the newspaper and broadcast teacher. I suspect she printed the magazine with what was left in her publication’s account each spring. She challenged me to take the literary magazine to the next level.

Left to my limited skills, the PHS literary magazine might have disappeared. However, thanks to the creative collaboration of the lit mag staff, this publication celebrating our school’s writers, artists, photographers and designers has been ranked among the top three in the state for the past several years. Last spring, the 2011 literary magazine captured All-Alabama in the Alabama Scholastic Press Association’s competition. In the High School Literary Arts Awards, the 2011 magazine won first place statewide for graphic design.

The 2012 PHS literary magazine, “Catalyst,” was released in June and will enter competition soon. The word catalyst means an agent for change. Change propels the lit mag staff as they prepare to send “Catalyst” to competition and to begin creating the 2013 magazine.

Currently, students create the magazine using original Creative Suite, InDesign and PhotoShop purchased in 2004-mainly because updating the software is expensive. We still run Word XP from 2003 because the old CS won’t read a newer Word.

“How much longer can we use the original InDesign to create the magazine now that InDesign 6 has been released?” Kane Agan asked. Agan is a lit mag design editor. As a cutting-edge designer, he is concerned that our software is almost a decade old.

In order to finance software and hardwire upgrades, the students are spearheading new fundraisers.

Rock the Hill, a showcase of PHS students who have their own bands, is set for Thursday, Oct. 25, from 6-9 p.m. hosted by lit mag and Theatre. Sign-up is currently under way.

Experienced lit mag staffers have also used their computer skills to create a PHS student ID selling for $5. See any staffer for details.