Chargers run past Meadowview in rout 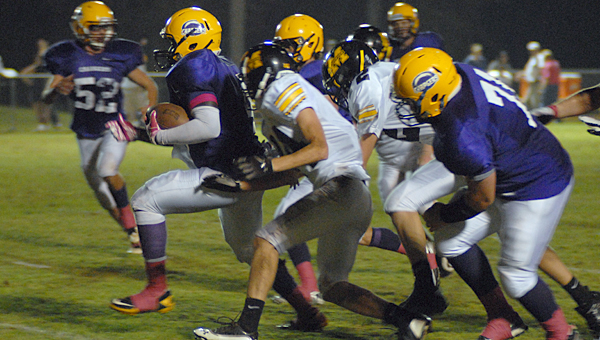 Cornerstone Christian senior running back B.J. Smith runs past Meadowview defenders on his way to the end zone in the Chargers' 63-22 victory on Oct. 5. (Reporter photo/Mickel Ponthieux)

COLUMBIANA – The Cornerstone Christian Chargers totaled 398 yards of offense on the ground with seven touchdowns to run past the visiting Meadowview Christian Trojans for a 63-22 victory on Oct. 5.

“We told them all week that we wanted to start strong,” said Cornerstone head coach Tim Smith. “Our kids are just scrappy. They have played hard all year and have practiced hard.”

The Chargers came out of the gate and drove 64 yards in just four plays capped by a Smith 40-yard bruising run to give Cornerstone a 7-0 lead following a Sterling Riether extra point.

Smith struck again midway through the first quarter on a 1-yard touchdown run to extend the Charger lead to 14-0.

Riether kicked a squib kick on the ensuing kickoff and the Trojans (2-5, 1-2) were unable to handle the ball and Nate Sawyer jumped on the ball for the Chargers. On their first play from scrimmage, Riether connected with Trevor Howell on a 17-yard touchdown pass for a 21-0 lead.

The Chargers took advantage of Meadowview’s second straight three-and-out on offense to set their offense at the Trojans’ 29-yard line. Five plays later, Michael Bevard converted on fourth down with a 5-yard touchdown run to extend the Charger lead to 28-0 to end the first quarter of play.

Young extended the Cornerstone lead to 35-0 to begin the second quarter when he broke free for a 21-yard run for the score.

On the Trojans’ ensuing drive, Dylan Lawrence led Meadowview down the field picking up three first downs capped by a Lawrence 10-yard run to cut the deficit to 35-6.

That score lasted just 23 seconds as Cornerstone answered with a 66-yard touchdown run by Young to capture a 42-6 lead. The Chargers extended the lead to 49-6 at the break when Riether rushed into the end zone from 1-yard out.

Meadowview cut into the deficit once more to begin the second half by capitalizing on a fortunate play for the Trojans. On 3rd-and-16, Seth Taylor attempted a pass to Lawrence, but it was tipped and nearly picked off by Cornerstone’s Tim Warren. The ball fell into the arms of Lawrence and he broke away from the Charger defense for a 71-yard touchdown to draw within five scores, 49-14.

Cornerstone had just six plays of offense in the second half with a running clock, but made the most of their opportunities. The Chargers capped their only offensive drive of the third quarter with a 17-yard run by Young to further their lead to 56-14.

Smith scored his third touchdown of the game when he stripped the ball from a Trojan ballcarrier and returned the fumble 43 yards for a 63-14 score in the fourth quarter.

Meadowview burned nine minutes of clock on their final drive of the game capped by a Joel Taylor 11-yard touchdown run for a 63-22 final score.

Smith led all rushers with 183 yards on 12 carries with two touchdowns for the Chargers with Young adding 155 yards and three scores on nine attempts. Bevard finished with 59 yards and a score.

Lawrence led the Meadowview offense with 57 yards on the ground with a touchown. Joel Tayloradded 54 rushing yards and a score.

Seth Taylor had 79 yards passing while completing just 2-of-4 of his attempts with a touchdown.

By GRAHAM CARR / Staff Writer PELL CITY-Vincent jumped to a 40-0 first-half lead and cruised to a 59-16 win... read more