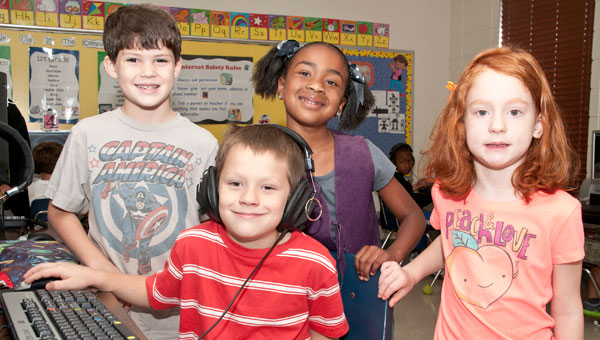 Caitlyn took a vote on where their group photograph would be taken. Nathan and Kenny won with two votes and chose to go to the computer lab, as seen here. From left, Nathan, Caitlyn and Marlee with Kenny seated at the computer. (Contributed)

A few young students at Helena Elementary School shared some highlights from the early weeks of school and memories from their summer.

Marlee Parsons pronounced her first few weeks of kindergarten to be “good.” She likes to do centers. “My favorite center is Home Living. You get to go up in the loft.”

Marlee said the most fun she had this summer was swimming in her Nana’s pool where she learned to do the backstroke.

First grader Caitlyn Copeland likes reading group. “We have a little timer that we set. Sometimes we do partner reading,” she said.

“This summer, my family went to Disney World ,and we rode in a boat over to see the fireworks. I wasn’t scared on any of the rides but I was a little scared of the fireworks. My favorite part was going swimming,” she said.

Nathan Thomason plays ball at Penhale Park, and he is No. 8 on the Bats Team. Nathan likes to read Lego books “where the people are made from Legos.”

“I have lots of Legos, and I just got just started building a new Avengers set,” he said, pointing to his Captain America T-shirt. “The Lego Avengers include Hulk, Ironman, Thor and Captain America.

“The best thing I did this summer was going to Orange beach with Pops and Bebe,” he added. Nathan said he is also going to go back to the beach for a weekend for his birthday this fall.

First grader Kenny Gainer’s favorite book is “Cat in the Hat.” Kenny also told about the big spider bite he got rolling around in his backyard this summer. “They had to cut my leg open with a little doctor’s knife.” (As I understood, they put him asleep to do this.) “Then they put a bandage on my leg and it healed back up,” he said.

“My dad is a pilot, and he took me flying this summer in an airplane with two seats. He took us upside down. He kept on spinning us around and round, and I accidentally puked.”

The progress on the future Helena High School proceeds. Residents are, across the board, enthusiastic and see it as Helena’s... read more