Rising above the influence 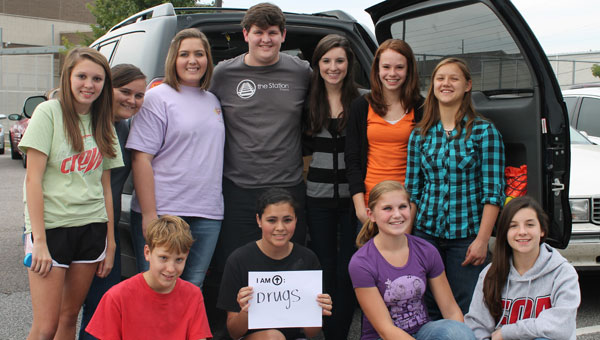 I asked, “Above the influence of what?”

The students, who were loading up their signs in the Pelham Police Department’s parking lot, looked up at me questioningly.

“Above the influence of everything negative,” PHS Senior Joseph Daley said.

Daley is part of an initiative that Pelham High School and Riverchase Middle School students are joining to add a new dimension to their active DARE organization with the National Youth Anti-Drug Media Campaign called Above the Influence.

“What’s great about this program is that kids are reminded to stay Above the Influence of whatever could lead them away from who they really are-whether that’s the influence of illegal substances or bullying and bad-decision making,” parent facilitator Windy Rosenstiel said.

“Kids are more likely to listen to other kids. Kids want to know someone their age feels the way they do,” Daley, a senior leader among the DARE group said.

Seventh-grader Trent Wiser said “Being different in a good way” motivates him to be active with DARE and spread Above the Influence’s positive message.

“I’m involved to show others that I won’t make the mistakes that some of my family members have made,” Alyxs Freeman said. “I will be Above the Influence and choose my life’s path.”

“Above the Influence means we choose to rise above anything that diminishes us as human beings,” Pelham Police Department DARE Officer Carrie Bowman said.

Adding this positive campaign to DARE has invigorated the program leading to record attendance at weekly Thursday morning meetings in the PHS auditorium.

Rising above the influence launches students toward abundance.

Excellence in the classroom

By CONNIE NOLEN / Community Columnist “I was driving to Andalusia to visit my family when the text came, so... read more