Running to win the race against breast cancer 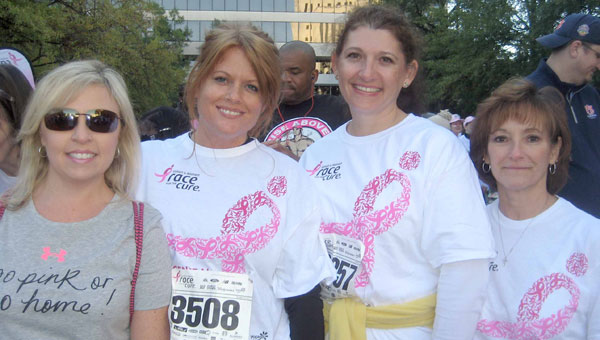 A few of the PHS Pink Panthers at the starting gate of the Susan G. Komen Race for the Cure: Donna Wages, Rebecca Burnett, Jackie Bennett and Debbie Adams. (Contributed)

Truth be told, Rebecca Burnett pushes me. She has an incredible energy that I admire. She pushes me to do more, to be more and because she pushes herself, I have a hard time telling her no.

When Jennifer Gonzalez created a PHS team to participate in the Race for the Cure, she asked for team name suggestions. Burnett’s suggestion won.

“We’re the Pink Panthers. Will you do this with me?” Burnett asked.

I didn’t commit right away to join the Pink Panthers for the October 20 Race for the Cure. Burnett kept sending emails. On the final day to register, I responded, “Nolen is all in.”

The need for intensifying the fight for the cure hit close to home this fall. A former student had frightening mammogram results-and she endured a tense two weeks waiting for a reprieve. My joy over my former student’s clean bill of health was tempered by my discovery that another old friend’s cancer had returned.

My first loss to breast cancer was a woman I never met-my mother-in-law-Georgia Pelham Waggoner Nolen. My eldest daughter is her namesake, Georgia Ellen Nolen. Last week, my daughter became engaged to a young man whose mother is a breast cancer survivor.

Pelham High School alums Dabo and Kathleen Swinney have been a force in the fight against breast cancer with Clemson Head Football Coach Swinney’s campaign urging women in the Clemson area to get “Mamos for Dabo.”

But what could I do? Thanks to Gonzalez’s decision to organize a team and my friend, relentless Rebecca Burnett, I could run. I ran my first 5K, The Race for the Cure, on October 20 amidst thousands-all wearing pink. The sheer number of participants moved me. Those who held signs or wore shirts bearing the image or name of those they ran for humbled me.

I ran for Georgia Pelham Waggoner Nolen, the mother-in-law I never knew. Next year, I hope to recruit more runners and raise more money. Working together, pushing each other, we can win this race.

Rising above the influence