Forty-one years of leadership and love 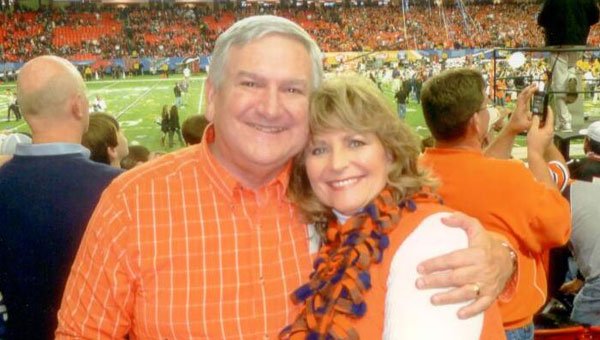 Mike and Carol Hill have been together for 41 years. (Contributed)

They met on a blind date at Auburn University during her senior and his junior year. Four decades later, they are and have been for a very long time one of Shelby County’s “power couples.”

Mike and Carol Hill seem to be the perfect couple. Always happy and greeting everyone with a smile, they are darn near perfect. Mike has enjoyed a career in the banking and title business and has been a member of the House of Representatives for the past 26 years. Carol retired from teaching in the Shelby County School system after 25 years. They are both civic leaders and live in Columbiana. Mike was recently named to a list as one of the top 40 most powerful people in politics and Carol received the Alabama Federation of Women’s Clubs highest award.

They have two adult children, Hayden and Hunter, and a son, John Michael, who died in a car accident at age 16.

Through their 41 years together, they have experienced everything from one end of the spectrum to the other. Carol said their secret to a successful marriage is “commitment.”

Carol’s advice to young couples is this: “You cannot go into a marriage thinking it won’t work, you have to go into it committing to each other that no matter what happens you can work through it.” She adds that putting the other person first and having a strong faith in God and love for each other is vital to a good marriage.

Mike and Carol should know, because political life is not always easy and the spouse has to deal with the politics as much back home as the official.

When they met, Mike invited Carol to Columbiana to meet his family. She told her mother she didn’t want to stay too long in case she didn’t like it there. When she met the Hills they were so “warm and friendly” that Carol wanted to stay longer. Obviously, she did.

The rest is Shelby County history as Carol immersed herself in every service organization imaginable and Mike has represented the county in Montgomery.