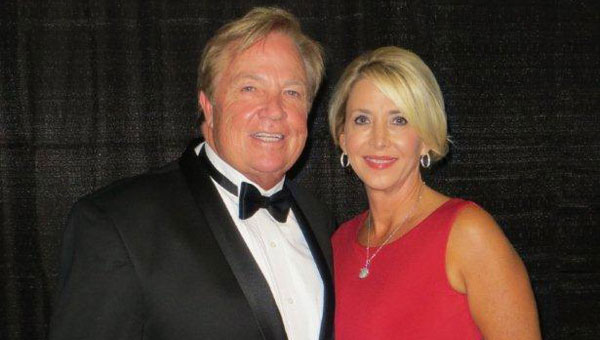 Bob and Debbie Butterworth enjoy one of their many outings together. (Contributed)

Debbie Hawkins and Bob Butterworth were introduced to each other by family members years ago, but when he saw her photo in the newspaper years later he decided to ask her on a date.

From that first date, they both knew it was a match meant to be. Their first date was to Atlanta to see “Jersey Boys” at the Fox Theatre. They dated for 14 months and got married in 2010. They honeymooned in Bora Bora and Tahiti.

Debbie retired at the ripe old age of 54 as the area manager for the Southern Birmingham Division of Alabama Power. Much of her work was with area businesses and civic groups in Shelby County – far too many to name.

Bob, who said he will more than likely never retire, owns a State Farm Insurance Agency in Montevallo and loves the flexibility that owning a business can bring. With both of their busy schedules, Bob said it is “essential to find time to be together as a couple.”

“Our marriage works because not only do we love each other, but we genuinely enjoy being together,” Debbie said.

While the two have separate interests, they also share many that they spend time together doing: travelling, riding bikes, cooking, seeing movies, working out and spending time with friends and family members.

Bob has two children and four grandchildren, and he and Debbie recently took them to Chicago to go sightseeing and watch a Cubs’ game.

When Debbie retired, the couple agreed to take a “trip of the month.” So far they have visited 11 states, and their most recent was their favorite – a trip to Niagara Falls and Canada.

Bob is a member of the Montevallo Chamber of Commerce and serves on the board of directors for the Troy University Hall of Fame. He endowed a scholarship to a deserving student there from Shelby or Chilton County.

Debbie is on the board of directors for the Shelby County Arts Council and Breast Cancer Research Foundation of Alabama.

Best of luck to the Butterworths for many happy years together.

Teacher of the Year award winner thankful for gift…