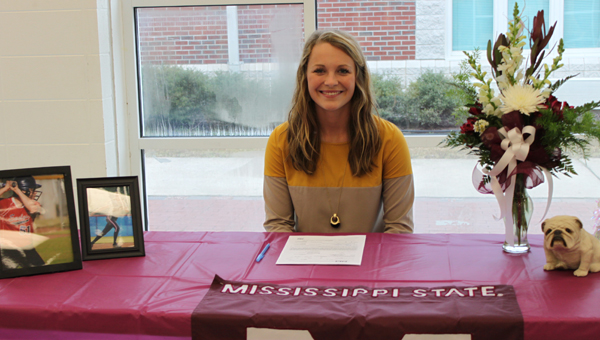 Seitz signed to play softball at Mississippi State, while Cosgrove inked with West Florida to play volleyball. Both Lady Eagle seniors said they were excited to sign to play at the next level.

“I’m excited and looking forward to it,” Seitz said of moving on to Mississippi State.

“I’m excited to go and start playing with a new team,” Cosgrove said. “I’m excited for the future at West Florida.”

“That was my goal from the beginning,” she said on playing for an SEC school.

Seitz has started since her sophomore season and has a .537 career batting average with 73 RBIs.

“She’s a special player,” said former Oak Mountain softball coach Danny DuBose. “She came in and earned a starting position. She’s a competitor and wants to be the best.

“To see her realize her dreams to play at the next level is good. It lets everybody see that hard work pays off,” he added. 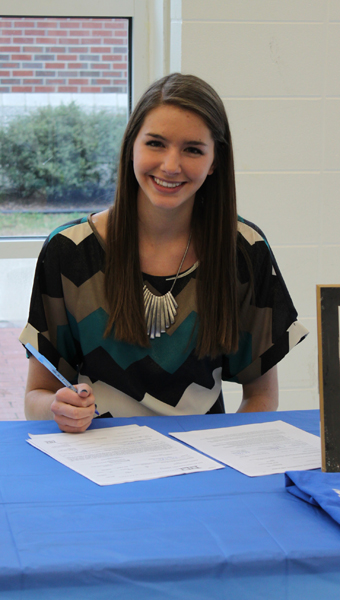 Cosgrove signed with West Florida just weeks after leading Oak Mountain to the Class 6A semifinals. She is a part of a senior class that has gone to the state tournament all four years and was named to the 2011 Class 6A All-Tournament team.

“Emily has carried the load for us,” said Oak Mountain head volleyball coach Lance Woods. “She plays two or three positions each game. She’s going to West Florida, which is a very competitive program.”

Cosgrove said that she knew that West Florida was the right fit for her when she walked on to the Pensacola campus.

“Their coaches are really amazing and every one there is so sweet,” she said. “I fell in love with the campus and the fact that it’s in Florida doesn’t hurt anything.”

Cosgrove led the Lady Eagles with 517 kills in her senior campaign along with 188 digs, 105 blocks and 65 aces. She said her four years at Oak Mountain have prepared her to play college volleyball.

“It’s just been really exciting to see how our program has grown,” Cosgrove said. “We have amazing coaches and have had amazing success the past four years.”