Mother and daughter to perform Dec. 1 and 2 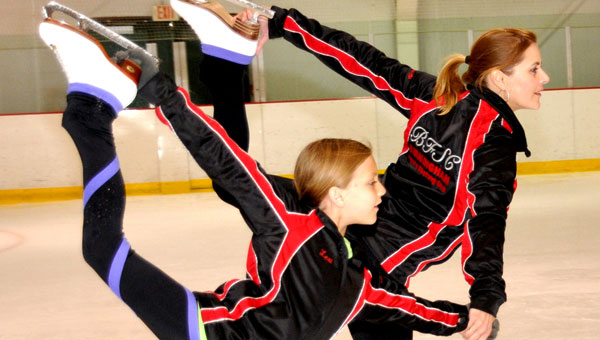 Mother-daughter skaters Kim Heitkam and Lexi Walton practice in preparation for their roles in “Enchanted Moments — Stories Told on Ice” to be held at the Pelham Skating Center on Dec. 1-2. (Contributed)

When “Enchanted Moments — Stories Told on Ice” is performed on Saturday and Sunday, Dec. 1-2 at the Pelham Skating Center, Helena mother-daughter duo Kim Heitkam and Lexi Walton are excited to be skating together in the opening number.

The show, which features a compendium of Disney movie songs, opens with “I Can’t Wait To Be King” from The Lion King. Kim will skate as a mother antelope and Lexi, age 7, as one of the young antelope calves.

“Lexi was toodling around the ice by the age of 2,” Kim said. “She was in her first show at age 3 with her brother Bret, who is now in eighth grade.”

Kim herself has loved being on the ice since she was 7 and growing up in Mount Prospect, Ill. Her grandfather, George Harris, encouraged her and transported her to lessons while her mother, Karen Jacobs, was at work.

Lexi was observed early on to have potential. She takes three lessons each week with private coaching and training with Eric and Heather Mumper.

Her mother said, “Lexi has a love for skating and a real knack for it, but she also works hard. Each time we come, I can barely get her off the ice. She always begs to stay one more hour.”

In Enchanted Moment, Lexi also performs as one of twin Tinkerbells with Peyton Demotte. This year, solo roles were cast from auditions, and Lexi is the youngest soloist.

In a number from Shrek, Kim will perform a duet and playful love story with Alex Darnell skating as the donkey and Kim as the pink dragon.

“Our program is a wonderful family-friendly entertainment event. Our skaters are just loving the Disney theme this year,” said Danny Tate. “We want the new mayor and City Council members to come see what talent we have here.”

It needn’t be a holiday to find Billy Dean Harris in good spirits. His upbeat attitude has served him and... read more