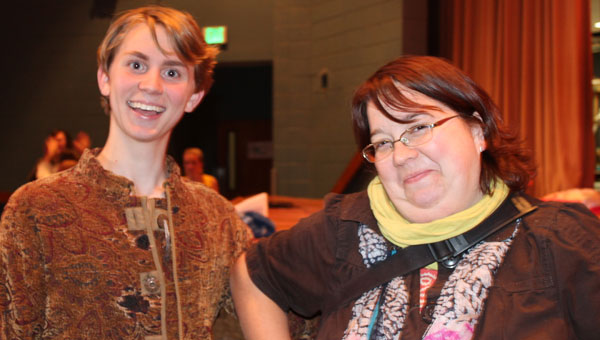 While Stephenson’s words are profound, her lessons for this production are inspired. As storytellers, whether writers or actors, our work is important. In an article titled, “The Psychological Power of Storytelling,” Dr. Pamela Rutledge says that stories allow us to “tap into creativity that is the foundation of innovation, self-discovery and change.”

In “Arabian Nights,” the production’s frame story, or larger story, features the character Scherazade telling stories to soothe an angry king and save the lives of her and her sister. Should her stories not ease her captor’s anxieties and convince him that love and loyalty can overtake the bitter betrayal he has suffered, Scherazade knows that she and her sister will die.

While Scherazade’s plight might set the stage for smaller stories of life and death, her anecdotes are actually infused with humor, a delightful dose of silliness, respect for virtue and compromise for family. As Scherazade, Emily Jacks’ poignant storytelling and her attempts to tame the invisible demons haunting others strike a resounding chord.

As court jester, Matt Hill’s physical humor and his subtle relationship humor leaves audiences chuckling, not only at Matt’s exquisite acting, but also at their recognition of similar silliness in their own lives.

Cameron Lee’s rendition of a scorned man, later healed by patience, unconditional love and soothing stories draws painful parallels of our own failure to forgive.

Wearing his betrayal as a visible armor of hatred, we are repulsed by this character-and yet magnetically drawn to him as he responds to stories with tenderness.

“As a child, I remember sitting at my grandmother’s table listening to my family’s stories,” Stephenson said. “I learned how to be a storyteller from those moments and I became an actor because, at my core, I am a storyteller.”

Storytellers are life changers and world changers. “Arabian Nights” challenges us to embrace the power of stories.

Constant change in the classroom