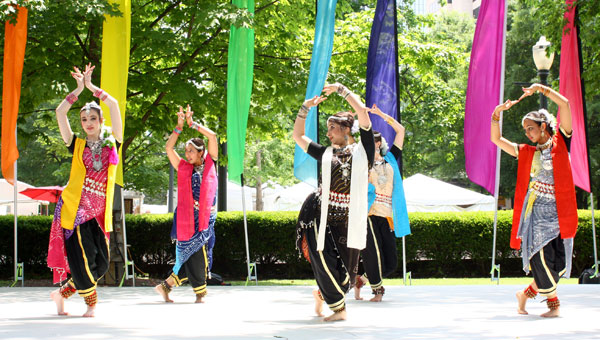 Notinee dance troupe, of which Helena Creels are active. (Contributed)

Sharon Creel joins with women and girls of all ages performing with the dance troupe Notinee.

“It’s carried us in lots of directions. We performed Midsummer Night’s Dream — re-tooled by Elizabeth and Alan Hunter, at Sloss Furnace four years ago.”

Both Creel’s daughters, Kaitlyn and Devin, study and dance as well. Devin, now 12, began classes at age 7. She hopes to one day have the opportunity to go study Odissi dance in Orissa, India.

“Our family used to attend John Scalici’s free drum circles with Community Dance Festival. There we saw performances by the Alabama Ballet, Bharatnatyam dancers and African genres of dance. I began to meet the dancers, including Pia Sen, (Professor of Economics at UAB) who founded and leads Notinee. I thought I could do it and wanted to try.”

Notinee performs Traditional Indian Fusion Dance and includes members who are Indian, Indian-American, American-born and foreign-born members of different ethnic origins. In keeping with the vision of its founder, Notinee’s dance is for everyone to enjoy.

“Our classes meet at Children’s Dance Foundation in Homewood. We perform about every other weekend year round.”

The troupe has performed at the Holi festival, the traditional Indian welcome to spring at Birmingham Museum of Art and at Gandhi’s birthday celebration held in October. They also participate at the museum’s Chinese Cultural Day or New Year, which in 2013, a snake year, will be Feb. 9.

Notinee performed at the Bengali Festival held at the Paris Hotel in Las Vegas earlier this year. This spectacular dance musical was directed by Sukalyann Bhattacharya.

Notinee danced as part of the Grand Opening Ceremony, Paroshmoni Choyaoo Praan E, as well as their own spotlight performance.

“This was amazing — a hundred dancers from the U.S., Canada and India tried out, practiced two days and went onstage. Being Vegas, there was even a live elephant on parade,” Creel said.

Creel also recommends Dance Across Birmingham on Jan. 19, a day of free dance classes designed for beginners of all ages and a free Birmingham Dance Showcase performance featuring a variety of Birmingham dance companies.

Mother and daughter to perform Dec. 1 and 2