Even further back in the day 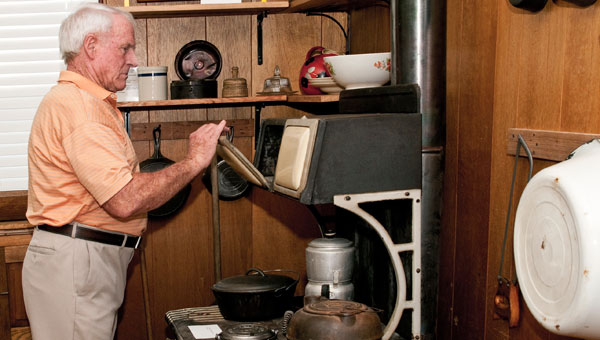 At the Helena Historic Museum is Mollie Harris’ sewing machine. Harris donated it and the family cookstove, examined here by James ‘Bubba’ Sides. Billy Dean Harris contributed his carpentry and painting skills to the museum’s interior, as well. (Contributed)

Billy Dean Harris was 6 years old in 1940. His father had died two years earlier, and his mother made clothes for Helena folks. They would send their measurements, and she would make a newspaper pattern.

“Ain’t no telling how many dresses and things I delivered to people close around,” he said.

“Grandmother lived with us; she kept a quilt in the frame all the time. She got $3 for a quilt if they furnished the materials; if she furnished backing, she got $5.”

His much older half-brothers worked for WPA, making about $19 a month, until they joined the service.

“With all that, I still can’t think of a better place to grow up. We had the woods and a clean creek we could drink from,” Harris said.

“When I was a boy, Helena looked just like the old photo you often see — no paved streets, just the little row of buildings there by the tracks in Old Town.

“The mining boom was over, but the woods were full of what we called ‘gopher hole mines.’ They just sprang up,” he said. “Paramount Mine was still working when I came along, Acton Mine (now Riverchase) and a few little gopher holes were still around, but they came and went pretty fast.

“There really were no bad people around; we had some characters — a few local drunks,” Harris said. “We never heard of drug dealers, although Shelby County was known as a whiskey-bootlegging county, and there were stills throughout the woods. When we kids went out to hunt, we knew to just ignore them.

“Everybody had a few cows, some hogs and goats. After morning milking they’d turn their cows out to graze in Lee Pasture (where Tucker Park is today) and collect them in time for evening milking.

“We fished pretty regularly until we got old enough to start ‘girling it,’ ” Harris remembers. “We’d say, ‘he’s no good, he’s started girling it now.’

“We’d have hog-killing days. That meant you got to stay out of school.” Harris would work alongside his two uncles, salting the hogs down, then putting them in the smokehouse. The next day the lard would be cooked out — and they had cracklings and sausage that night.