Stogner colors outside the lines 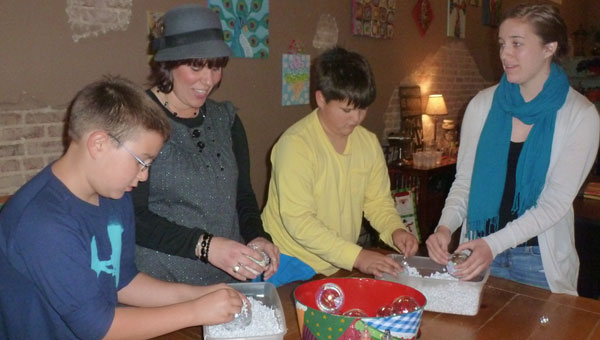 Jonathan, Trina, Tanner and Maggie Stogner create a Christmas ornament in Stogner’s store on Main Street in Columbiana, Color Outside the Lines. (Contributed)

Trina Horton Stogner has returned to Columbiana and has opened her unique inviting shop, Color Outside the Lines, on Main Street in the former Columbiana Jewelers building.

“Columbiana has wrapped its arms around us and welcomed us back,” said Stogner.

For the last eight years, Stogner has had a successful business in Louisiana that she has moved to Columbiana, Color Outside the Lines. Stogner’s desire is to provide creative outlets for kids, women’s paint classes and special events that are affordable.

She offers two classes for children K-12 after school as well as home school students (cost $12/class). She feels that investing an ounce of time has a huge award on little lives.

“Masters on Main” is an interactive art history class focusing on a different artist each week. Stogner shows where the artist lived, and how his art affected the world, and the students produce a piece of art inspired by the artist using various mediums. “Craftin’ Tuesday” is an open and fun class where each week Stogner leads the class in all kinds of mediums to create something new.

Private parties are also a big part of Stogner’s business. Whether it is a cupcake birthday party or a princess paint and sip, there is no limit to what she will do.

“I hope everyone feels comfortable in my shop,” said Stogner. “This building feels like New Orleans. My family has had a steady rain of grace for the last five months with so many doors opening.”

From left, Mary, Joseph and baby Jesus in a stable in Bethlehem with some town children and the Robinson grandchildren.... read more