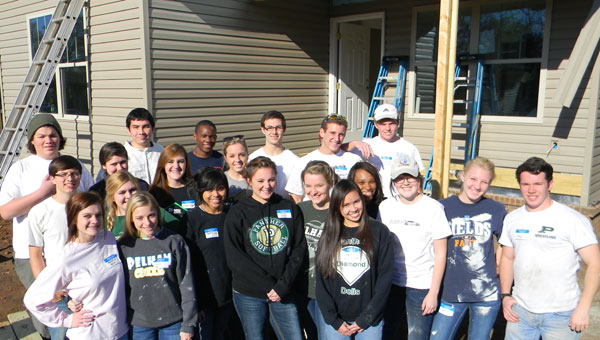 “I won’t be here tomorrow Mrs. Nolen,” Devin Stevenson said. “You know why?”

“You’re going on a field trip, right?” I asked.

“Yep, I’m in Habitat for Humanity. We’ll be gone all day. We’re going to build a house,” Stevenson responded.

“Devin, will you take some pictures for me? I would really like to write about the PHS chapter of Habitat for Humanity,” I replied.

“No problem. I’ll get pictures for you,” he said.

Stevenson is a man of his word. He brought back great pictures and great stories of the PHS Habitat for Humanity chapter’s November build.

“We went to the Advent project in downtown Birmingham where we helped Rodrigo, our guide, build a home for Habitat for Humanity so a family would be able to move in right before the holidays,” Stevenson said.

The leader of the PHS Habitat for Humanity chapter is senior English teacher Ryan Dye. Dye is also a PHS graduate.

“I volunteered to lead PHS’s Habitat for Humanity chapter because it’s a good fit for me. I enjoy hard work and I appreciate that Habitat is not a give-me-for-free charity,” Dye said. “Habitat requires their homeowners to participate in home building and learn about home ownership.”

Because PHS Habitat for Humanity is a charter, Dye explains that the group is must be educated about Habitat’s history and mission. As always, Dye exceeds his requirements.

“The homes are not actually given away,” Senior Devin Stevens said. “They are financed to a family for a long period of time at a very low price and interest rate.”

“Building a house for someone else is one of the greatest experiences I’ve ever had. I enjoy working with my hands and helping others, and I love being outdoors,” senior Connor Slane said. Mr. Dye loves the outdoors too-and he is fun to work with.”

“Our student volunteers never cease to amaze me. They are eager for challenges and open to learning the skills required on the worksite,” Dye said.