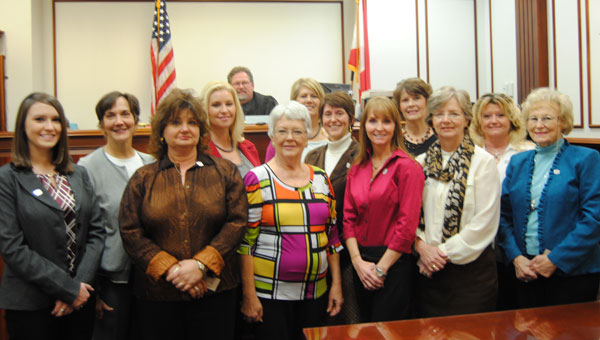 The CASA volunteers were sworn in by Judge Jim Kramer on Dec. 5.

This year’s training program consisted of an additional computer program in which the volunteers viewed videos, read specific cases and responded to them outside of class.

Driver is thrilled with the new group of 14 volunteers and says they come from all walks of life. “There is one thing for sure, they are ready to go to work helping our children and we are glad to have them,” Driver said.

There were also guest speakers that addressed specific issues with the class. Judge Kramer, Guardian Ad Litems and members of the Shelby County D.H.R. staff were all a part of the training program.

The purpose of the CASA program is to prevent child abuse and neglect, to go through the court process with the children they serve and to ensure that every child has a safe and permanent home.

Numbers of child abuse and neglect reports have rapidly increased as the fast-growing population of Shelby County has increased.

“When you take into account that Shelby County is considered the number — one place to raise a family in the state it is mind boggling. While that is a very positive thing, there are still cases of child abuse and neglect and if there were only one, it would be one too many,” Driver said. CASA started 13 years ago when then-Judge Patti Smith decided the program would benefit her court, an overworked D.H.R. and most importantly, the children of Shelby County. When elected after Smith’s retirement, Judge Jim Kramer, who continued his work with CASA, stated that it improves lives, protects children and saves the county “hundreds of thousands of dollars a year.”

CASA of Shelby County is funded in part by the Children’s Trust fund. To learn more about CASA and how you can become involved or contribute, visit casaofshelbycounty.org.