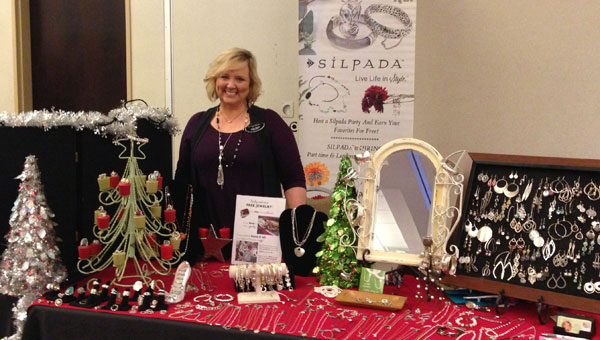 Julie Seals at one of her many jewelry shows. Julie is considered the Silver Queen of Shelby County. (Contributed)

Julie Seals is the Silver Queen in Shelby County. She is a leading sales representative for Silpada jewelry and has been selling the .925 silver pieces for three and a half years.

She has more than 450 pieces of jewelry on display at one of many shows she puts on each year in homes, at craft shows, exhibits and more.

Julie is a Star Leader, which has certain criteria that have to be met in order to reach that level of success. Her outstanding sales have earned her more than a coveted title, but also several nice all-expense paid trips to Puerto Rico, a cruise to Cozumel and Key West, Fla., and an upcoming trip to Hawaii in January 2013.

After winning National Rookie of the Year, Julie was later asked to be in the first Silpada television commercial and was flown to Kansas City, Mo., to do so. This year, she was honored to be asked to speak as a National Conference Trainer at the National Conference, where there was an audience of nearly 5,000 Silpada representatives. This all started because Julie loved the Silpada jewelry and its uniqueness. She wanted to sell it because of the flexibility and fun she knew she would have in business for herself versus the standard 9-5 job. With this job she gets “girl time out” and makes $300 or more a night at jewelry parties and gets to meet new friends, too. Julie loves being self-employed and having an unlimited potential on how much money she can make. Seals said there are several reasons people become Silpada representatives: They love the jewelry, want to meet new friends, for personal growth or a one-time goal. For Julie, it appears it was for all these reasons and she is prospering from her decision to go into the business for herself. Seals is not only a national-award winning Silpada representative, but she’s Shelby County’s Silver Queen.