Trip of a lifetime for Indian Springs couple 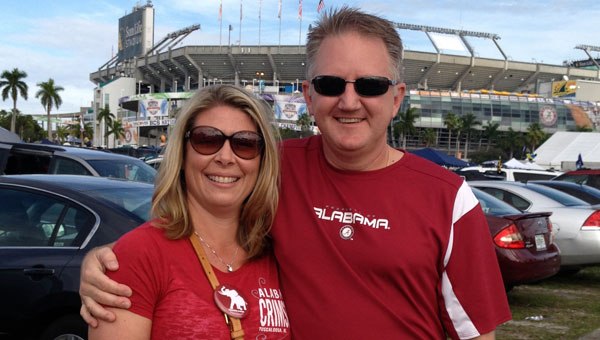 Meredith and Jason Combs in Miami for the BCS Championship Game. (Contributed)

Jason and Meredith Combs, two nurse anesthetists from Indian Springs, were in Miami for the BCS championship game and the entire weekend leading up to it. For two professionals who put people to sleep for a living, they did not sleep much themselves for a few days.

“It is our first championship game and we are so excited,” said Meredith, who was tailgating with friends and family when I called.

She is an Alabama graduate and her husband is a graduate of UAB.

“It is the experience of a lifetime between two historic teams and we are here to see it,” Meredith said.

The couple stayed on South Beach and walked to multiple fan events during the weekend. They were featured in a commercial with Rick Karle and Mike Dubberly from Fox 6 scheduled to air game day. They knew it was based on the text messages they received from friends back home.

They hung out on the beach in the picture perfect weather, followed the Million Dollar Marching Band to the pep rally and attended the Beach Fanfare with a Dierks Bentley concert.

They attended Game Day Fan Zone and met Luke Bryan at his concert. When asked why the Tide would win the game, Jason said, “We’ve been here before, it’s just another ball game for us, and we have more experience and better coaching.”

He noted a Wall Street Journal article regarding the “Tide Dynasty,” Coach Nick Saban and what the football program provides for the university and the state from a monetary aspect. Noting there appeared to be more Notre Dame fans there, Jason said, “When you only get to come to the championship game every 20 years I guess you all want to be there.”

One thing is for sure: the Combs were there and had the time of their lives. It was worth the money, the time and the effort to find fellow employees to cover for them at work to be a part of this lifetime experience and another national championship.