Family talks about its mission to Swaziland 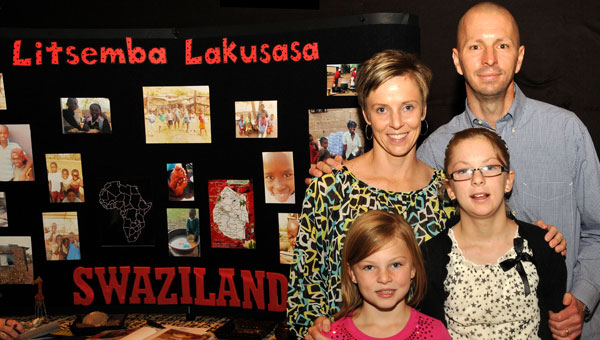 The Clyburn family, Mark and Allison and daughters Emma and Madeline, are pictured with their display showing the faces and stories of several of the children they encountered in their missionary work, as well as cultural crafts. (Contributed)

“Before I really learned about Swaziland, I thought its name sounded like an exotic international theme park,” Allison Clyburn told the audience at Helena United Methodist Church.

The Clyburn family, Mark, Allison, Madeline and Emma, returned to the United States for a three-month furlough this past December, having been in this small African country since September 2010.

“We first encountered Swaziland on a two-week mission. In 2009, we could see that if we really wanted to be effective for God and make that true difference, we would have to take that next step,” Mark said.

“God directed us. The people there blew us away, especially the hearts of the kids. There are currently approximately 150,000 orphans there.”

Swaziland has the highest rate of HIV infection in the world, with approximately 35 percent of the population infected. The life expectancy has fallen from 61 years (in 2000) to 32 years and it is believed that within the next 50 years there will be no adults alive.

Sponsored by Children’s Hope Chest and Adventures in Missions (AIM), the Clyburns have helped set up CarePoint stations which provide food, water, and basic medical care and discipleship.

“Our ministry has been in Survive stage for about five years. The next step is the Thrive stage and now education is huge, it is key,” Allison said.

Currently working with about 60,000 children, they are raising money for school and for uniforms for the children who show interest and work hard. The entire cultural mindset must be evolved from the concept that women must do all the work and the men are to be treated like kings.

A Sports Ministry (soccer) is especially needed for the older boys, to show and model the benefits of hard work.

A focus on agriculture to improve nutrition is being implemented with local gardens to raise more greens, such as cabbage. The Swazi diet has consisted mostly of a grit-like cornmeal and a sugar bean.

You can follow the Clyburns blog, kept since the inception of their arrival, online at: Theclyburns.myadventures.org

Allison has added an insightful installment titled ‘Top Ten Ways You Know You Are a Missionary.”