How do you pull a tiger’s teeth? 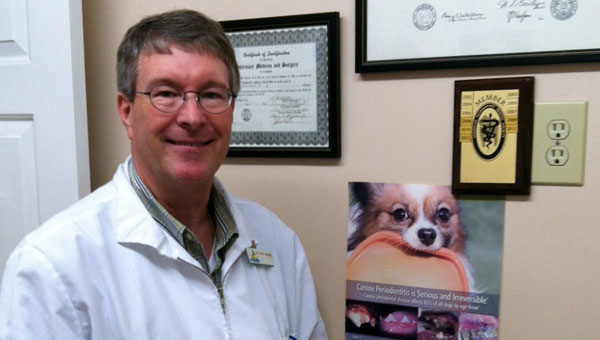 This is not an Alabama football joke. It is about one of our neighbors who graduated from Auburn as a veterinarian and is known throughout the South as a veterinary dentist.

When the Birmingham Zoo recently had tiger toothache problems, they called Dr. Robert Gaddis of Indian Springs for help.

In 2010, Dr. Gaddis extracted teeth and later did a root canal on a huge, 500-pound white tiger. In Dr. Gaddis’s reception room, you can see photos of that tiger and his human hand-sized paw print. While that tiger was sedated, it took five men to lift it onto an operating table.

How does someone learn to give root canals to tigers?

“After graduating from Auburn in veterinary medicine, I practiced in Atlanta with a veterinarian who did veterinary dentistry. That is where I became interested,” said Dr. Gaddis.

In 1984, Dr. Gaddis moved his practice here. While he worked at his Indian Springs Animal Clinic, he also traveled to veterinary dentists for dental training. In 2009, he was certified a diplomat, American Veterinary Dental College.

Dr. Gaddis and his staff operate Indian Springs Animal Clinic, located on U.S. 119 across from Indian Springs School. It is a caring, convenient place for villagers to take their pets for check-ups, vaccinations, illness treatment and boarding services. For information, call 988-8654. Their web site is Indianaspringsanimal clinic.com

There is, however, more going on there than one would expect. You might see cars with license plates from Georgia, Tennessee or Kentucky in his parking lot. You may also see law enforcement vehicles from Hoover, Birmingham, Homewood, Jefferson and Shelby counties, and other places. They bring police dogs with toothaches to see Dr. Gaddis.

“We see a number of police dogs,” explained Dr. Gaddis. “Their teeth are their weapons, and sometimes they get broken.”

When that happens, Dr. Gaddis and his team perform root canals and install stainless steel caps on the broken teeth. That allows those highly trained, expensive law enforcement animals to return to work in the communities they protect

A Winning Streak Soccer Shop is quite unique