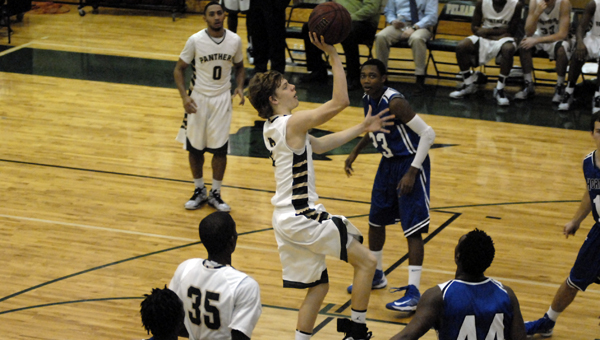 Pelham's Zach Allison shoots for two of his six points in the second half of the Panthers' 70-38 area victory over Chelsea Jan. 22. (Reporter photo/Mickel Ponthieux)

PELHAM – The Pelham Panthers weren’t going to allow what happened the last time they took the court against the Chelsea Hornets as they picked up the 70-38 Class 6A, Area 8 victory Jan. 22.

“The last game we were up a bunch and Chelsea had a chance,” said Pelham head coach Joel Floyd. “This game was all about staying focused until the very end.”

Pelham jumped out to a 17-8 lead in the first quarter before Dakota Clark helped break the game open for the Panthers. Clark scored 10 of his game-high 16 points in the second quarter and led Pelham on a 9-2 run to end the first half to take 39-22 lead.

The Panthers continued to build their lead through the third when they took a 49-31 lead into the fourth. Pelham held Chelsea to a game-low seven points in the final quarter to secure the 70-38 win.

The Panthers’ win sets up a battle for first place in the area against Spain Park Jan. 25.

“Friday decides who hosts the area tournament,” said Floyd. “We are excited about that opportunity to play against Spain Park.”

In addition to Clark’s 16 points, Zach Morton scored 14 points for Pelham. Justin Brooks and Willie Simpson each scored 10 points for the Panthers.